Login Not a member? Join ( Why? )
Subscribe to the IRE Radio Podcast
IRE Conference Blog » ‘Spotlight’ journalists take us behind the movie, discuss the future of investigative reporting 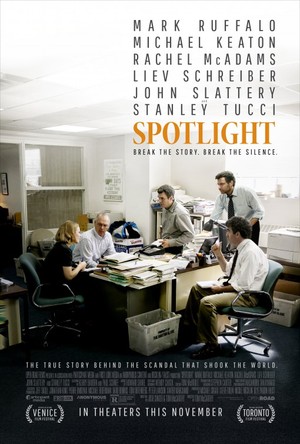 “The truth may never be known.”

That quote from an article in the Boston Globe is what motivated Marty Baron to get the paper’s Spotlight team to investigate the Archdiocese of Boston. The team’s reporting uncovered an unprecedented and elaborate cover-up of clergy sexual abuse of children.

Now, more than a decade later, their story has become an Oscar-winning movie that has shined a light on the careers of investigative journalists. In New Orleans, a standing-room-only crowd of journalists listened to the team discuss the experience of having their work turned into a film.

Attendees laughed at the “magic” of the movie scene showing the team creating lengthy spreadsheets, a moment likely overlooked by an average viewer.

“It was my first spreadsheet,” confessed Robinson, the Globe’s Editor At Large. The entire team agreed that the movie stayed true to real life and simply cut out some of the tedium of the reporting process.

Perhaps the biggest takeaway from the panel was how much the field of journalism has changed since the Globe broke the story in 2002.

The panel discussed how large newsroom staffs have shrunk in size and beat reporters have had to take on more responsibilities.

Baron, Robinson and Pfeiffer all expressed concern when asked if things would be different had the allegations of sexual abuse come to light in today’s media environment.

“It’s scary,” Robinson said about the cutbacks. The Globe can no longer afford to have a beat reporter at the courthouse, a position that provided pivotal documents in the Catholic Church investigation.

Pfeiffer said that despite all of the great publicity the paper has received since the movie came out, it hasn’t improved the Globe’s financial situation.

“We’re in this climate where we have to work more and more on collaborating and less on competing,” Pfeiffer said.

Emma Henderson is a recent graduate of the Missouri School of Journalism with a Broadcast and Investigative Reporting emphasis. This is her first IRE Conference. She is originally from Westerville, Ohio.