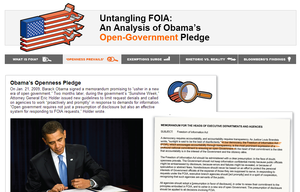 Transparency Watch is an occasional series from IRE tracking the fight for open records. If you have a story about a quest for public records you’d like to share, email us at [email protected].

President Barack Obama on his first full day in office ordered federal officials to “usher in a new era of open government” and “act promptly” to make information public.

Bloomberg News in June set out to test out that promise of openness. Transparency is a core value of the company and our news coverage, which is why, for example, we don’t agree to quote approval or use anonymous quotes.

More than 30 reporters submitted the same Freedom of Information Act request to 57 government agencies: The cost of fiscal year 2011 travel by top officials.

The investigation was in part designed to gauge the timeliness of responses, which Attorney General Eric Holder had called “an essential component of transparency.” In addition, anecdotal evidence from Bloomberg reporters was piling up about the lack of responses from various government agencies under Obama.

Three months later, the results were in.

Nineteen of 20 cabinet-level agencies disobeyed the law requiring the disclosure of public information within a 20-day window required by the Act.

About half of the 57 agencies eventually disclosed the out-of-town travel expenses generated by their top official by Sept. 14, most of them well past that legal deadline.

We’re still waiting for the other half.

Even agency heads who publicly announce their events — including Holder, Secretary of State Hillary Clinton and Health and Human Services Secretary Kathleen Sebelius — didn’t provide the costs of their trips more than three months after the initial request.

The reporters involved in the project all requested documentation of the following: A list of trips taken out of Washington, D.C., by the head of the agency; documents showing dates and modes of transport; and a breakdown of travel expenses, including all gifts or reimbursements covered by outside sources. Those travel records, already tracked internally, are of inherent interest to the public, particularly in the wake of the conference spending scandal at the General Services Administration.

The Freedom of Information Act, signed into law by President Lyndon B. Johnson in 1966, is designed to open up the process of government to citizens. In the past, FOIA has been used to obtain a wide range of government records. Among them: Documents on the use of the defoliant Agent Orange during the Vietnam War; Department of Transportation reports detailing safety issues with the Ford Pinto’s fuel tank that contributed to some 500 deaths; and details of the Bush administration’s deliberations on the use of torture following the Sept. 11, 2001 terrorist attacks.

I, along with my co-reporter Jim Snyder and editor David Ellis, logged the requests in a database, tracking them by their FOIA identification numbers and documenting correspondence.

Agencies are supposed to respond to a FOIA request 20 working days from the time they receive it. We started the clock two working days after we filed each request because some agencies sent us acknowledgments weeks after we had submitted them. Some failed to acknowledge them at all. Moreover, we discovered that here is no uniform method of filing a FOIA request with major agencies: Some accepted e-mail, while others asked for faxes or had set up Web pages for filings. The Internal Revenue Service was unique in requiring that the request be submitted via snail mail.

Eight of the 57 agencies sent responsive documents within the 20-day legal timeframe.

Some of those agencies offered responses that left open questions about the accuracy of the records. National Aeronautics and Space Administration head Charles Bolden, for instance, took at least 46 trips valued at a total of $93,110. Eight additional trips were listed as costing zero dollars, including at least five that were cancelled, according to Michael Cabbage, a NASA spokesman in Washington. NASA’s system for tracking the travel doesn’t make a distinction between trips that were cancelled and those that occurred.

In other words, the agency that can operate a robot on Mars has a tough time keeping tabs on the whereabouts of its own administrator.

Many agencies said there would be delays, sometimes of indefinite length.

The Department of Housing and Urban Development estimated that it would take 30 to 45 days to complete the processing of the request for Secretary Shaun Donovan’s records, according to a June 6 e-mail. As of Sept. 28 when we published the story, we hadn’t received Donovan’s records, 79 days after the request was filed.

Three days before our project ran, we received an e-mail from a State Department FOIA official, explaining that the travel records of Susan Rice, the U.S. Ambassador to the United Nations, would remain unfulfilled for more than a year.

“We really appreciate your patience in this matter. The estimated completion date is July 2013,” the FOIA official said.

In the course of reporting for the project, we discovered that agency officials sometimes appeared unsure of their obligations under the law, undertrained or overworked.

For example, Kathleen Miller, a reporter who writes about government contracting, had sent a FOIA request to the State Department on May 23, requesting records of gifts to foreign dignitaries and gifts to federal employees from foreign sources. She had received a June 4 letter, acknowledging the request.

On July 27, having heard nothing more about the request, she called the contact number listed on her acknowledgment letter. The man who answered the phone said his office had contacted three separate offices to get the information she was seeking but they had nothing.

She said she understood they had 20 days to reply.

He added, “It takes six months to a year to get a request done. That’s just the reality here.”

When she asked for his name, he refused to give it. He said he was tired of being yelled at all week. Then he hung up the phone.