Login Not a member? Join ( Why? )
Subscribe to the IRE Radio Podcast
IRE News » Behind the Story: Investigating a building collapse, creating an interactive timeline 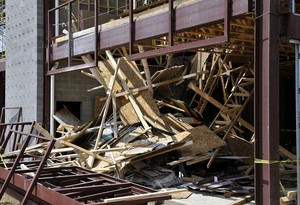 A normal day on the local government beat became two months of investigating for Lansing State Journal reporter Lindsay VanHulle.  After a portion of the residential St. Anne Lofts building collapsed in East Lansing, Mich., VanHulle discovered problems in the city’s building code and development programs.  Prior to the building’s collapse, these problems allowed unpermitted construction to continue for months.

VanHulle’s findings were released in an interactive timeline for the Lansing State Journal in September.  Shortly before the article was published, East Lansing’s code enforcement and planning departments were restructured in an effort to improve communication.  VanHulle shared some insights into her reporting process with IRE via email.

Where did the idea for the reporting come from?
The day I returned to work in June after attending my first IRE conference in Boston was the day a portion of the St. Anne Lofts building collapsed. We heard it over the police scanner. At the time, it sounded like an unfortunate construction error. Two days later, I filed a request under Michigan’s Freedom of Information Act with the city of East Lansing to review all documents related to construction on the project, including site plans, inspection reports and incident reports. We learned about the formal stop-work order for the unauthorized fifth floor the following week. I went to my editor and said, “I think there’s something here.” 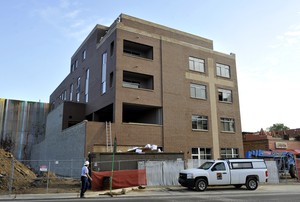 What was the most interesting part of the reporting process?
Piecing together the sequence of events. I was working with a stack of documents dating back several years, and they weren’t necessarily in order. Once it became clear how and when things unfolded, it was like someone had switched on a light bulb. I knew I had found my story.

What are some setbacks you faced? How did you work around them?
I had to write the story without two crucial interviews — the city’s then code enforcement director and the project’s developer. Howard Asch, the code enforcement director, declined to comment because of a separation agreement he signed with the city. The developer didn’t return several phone messages I left at his office. I had a slight advantage with Asch, because I had numerous memos he’d written on city letterhead that could speak for him. It wasn’t perfect, but it at least offered an opportunity to share his side. I had very little from the developer to work with. I did interview the project’s general contractor, which was the closest I could come to portraying the development and construction perspective.

What were the most interesting things you found that didn’t make it in to the reporting process?
Inspection reports from two separate engineering firms outlined in very technical detail what caused the collapse and other structural flaws that were discovered upon further review. We left them out partly because of the story’s length and partly because we were concerned that wading too far into design specifications and soil borings would make the story inaccessible to most readers. We knew that for this story to have the impact we wanted, we needed people to get through it. We posted the engineers’ reports in full and linked to them through our website, so readers who wanted to go deeper into the details were able to do so.

Which documents and data were crucial to this story, and how did you get them?
My FOIA request returned stacks of documents from multiple city departments dating back at least to 2010. I relied primarily on documents from a few months this year — copies of the stop-work order and building permits, citations and internal memos. I filed my initial request June 20. Under Michigan’s law, the city has five days to respond and can take an extension of up to 10 business days, which East Lansing did. A colleague and I spent two hours reviewing them in the city’s planning office and the city emailed me PDF copies of pertinent documents.

Why did you decide to present the data in an interactive timeline?  What tools did you use to do this?
We knew we wanted to include a timeline in print, because it was the clearest way to bring people into this story. Our regional digital news director, Reid Williams, suggested we find a way to also make it interactive for the Web. He used Timeline JS, a free online timeline building tool, which works off of information posted in a Google document. I imported dates and descriptions into Google Docs and Reid linked photos on Flickr, a Google map and PDF versions of city documents to the timeline. We posted all of the documents we obtained on the free document hosting site Scribd, which allowed people to click through the timeline and read the primary source information as they wished.

After this experience, what advice can you offer fellow investigative reporters?
Communication is crucial. On a project with a lot of moving parts, like this one, it’s so important to keep everyone — editors, digital producers, designers, graphics artists, photographers — on the same schedule. Be an advocate for your project. If you know you’re going to need time away from your daily schedule to tackle it, make a case and then follow through. I am fortunate to work with a good team that really understood the impact this story could have and freed me up as best they could to pursue it. Stay organized. Keep notes, documents, photos and any other information you need in a separate file. And log all communication with the agency you’ve FOIA-ed.

What do you hope will change as a result of your reporting?
Some things were put in motion before my story ran — the city had started to realign departments, for instance. I hope it prevents a similar situation from happening again. I hope it forces other municipalities that are considering development projects to pay attention and be vigilant.

You can reach Lindsay VanHulle via lvanhulle@lsj.com or on Twitter @LindsayVanHulle