Login Not a member? Join ( Why? )
Subscribe to the IRE Radio Podcast
IRE News » Behind the Story: The San Diego port, altered public records and interactive presentation 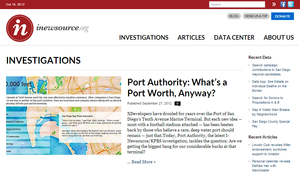 San Diego’s Tenth Avenue Marine Terminal is home to a rare deep water port that’s valuable to the maritime industry, but for the last ten years, developers have argued that the area should be transformed into an entertainment district.  When two businessmen responsible for running the U-T San Diego began promoting the stadium, Brooke Williams of iNewSource.org along with reporters from KPBS San Diego decided to investigate.  Their series “Port Authority:  What’s a Port Worth, Anyway?” compiles reporting, documents, interactive pieces, and video to show the plans and potential effects the changes would have on San Diego’s terminal and the people who work there. William’s shared details of the reporting with IRE via email.

Where did the idea for the reporting come from?
U-T San Diego published a front-page editorial declaring the newspaper’s number one priority was to build an entertainment complex with a new football stadium on a port terminal downtown. The terminal has a seven-figure view of the bay, and developers had been trying to build on it for a decade.
The newspaper’s publisher, Doug Manchester, had made a career out of developing the downtown coastline. The editorial included a disclaimer saying he had no financial interest in the proposed development and no longer owned two hotels nearby.
We set out to determine whether or not that was true and what, if anything, he and CEO John Lynch were doing behind the scenes to push the project forward. In the big picture, we thought it was an important public service to shed light on why this was their top priority as owners of the largest daily newspaper in the county.

What was the most interesting part of the reporting process?
Digging into emails between public officials and newspaper CEO John Lynch was fascinating, especially after we realized a Port Commissioner, who is also running for Congress, had altered one of the records. It was interesting to wade through hundreds of pages of SEC records and examine the ownership of hundreds of properties to finally find one document showing Doug Manchester did, indeed, have a financial interest in the two hotels.

The investigation had a big impact and also led to some interesting follow-up stories. In fact, there are more to come.

What are some setbacks you faced? How did you work around them?
One of the biggest obstacles was that neither Manchester nor Lynch would agree to talk on the record. They said they would be interviewed only after the election. So, we included that detail in the story. (Lynch ended up talking once the story ran.) In order to include Lynch’s perspective without an interview, we obtained audio archives of him talking on the radio many years earlier, advocating for the stadium project. We also obtained a recent audio recording of Lynch speaking at a private event about the stadium proposal. The event wasn’t open to reporters, but there was at least one person in attendance willing to share! The audio made for great radio, gave us a few new leads and enabled us to include some of his perspective in the story.

Shortly after publication, we faced a situation in which another news organization, Voice of San Diego, obtained the same email we had received in response to our public records request—only the one it had contained two additional sentences. It turned out Port Commissioner Scott Peters had removed two sentences—one of which was a threat from Lynch—before sending the email to a Port attorney. Only the truncated version was within the Port’s computer system, so that is the only one we received.

Rather than feeling sour about being scooped, we set out to determine what happened. That digging has led to a great follow-up story, which we are working on now. Long story short, Peters knew beforehand that he had deleted lines from a public record.

Lastly, in order to figure out if Manchester had a financial stake in the stadium project, we had to examine his business and property holdings. Having developed much of the downtown coastline, he had dozens upon dozens of limited liability companies and partnerships. It was daunting, but we created a spreadsheet of those firms, which enabled us to keep them organized as we pulled the property records for each one.


What were the most interesting things you found that didn’t make it in to the reporting process?
In our examination of property holdings around the terminal site—where the newspaper proposed building a stadium—we found evidence that other local political players owned property nearby. We dug into those people and determined that they were likely involved in the newspaper’s vision and plan to push it forward.

We also discovered some evidence showing Lynch might be breeching the wall between editorial and news—influencing some of the material in news stories, especially those about the Port.

Which documents and data were crucial to this story, and how did you get them?
We filed Public Records Act requests to obtain emails between John Lynch, Doug Manchester and public officials.  The emails showed Lynch was using his status as CEO of the newspaper gather support for his proposed development. One email from Lynch included a threat, saying if the Port Commissioner didn’t comply, he would launch a newspaper campaign to disband the Port. Lynch also was claiming to have made “significant progress” convincing other officials to support it.

We used the full text search in the SEC’s Edgar system to find any mention of Doug Manchester–and a handful of the results showed he had sold his hotels near the proposed development site in exchange for hundreds of millions of dollars in preferred stock in the company that owns them.

To dig into financial and political connections, we searched current and historical campaign finance data in the city of San Diego. We found that Doug Manchester and John Lynch were longtime supporters of Carl DeMaio, a mayoral candidate and city councilman. In an email we got in response to a PRA request, Lynch touted having support of “one of the mayoral candidates.”

We saw that mayoral candidate DeMaio set up a 527 organization in 2004, San Diego Citizens for Accountable Government, so we pulled IRS Form 990 records to see the donors. We found that Manchester and Lynch, and their companies, initially were the only outside contributors to the group.

To determine who might have an interest in the U-T’s stadium vision, we examined the ownership of each parcel of land within about five blocks of the terminal. To do this, we used county assessor records showing parcel ownership and corporation records with the Secretary of State. Along the way, we also found an Alpha site that was helpful, although we had to confirm any details with the assessor. The site is apal.co, and it contains parcel ownership information.

Why did you decide to present the data in multimedia platforms like video and an interactive timeline?  What tools did you use to do this?
We decided to present the material in a multimedia platform for a number of reasons. First, the sheer amount of information would have been overwhelming in a purely text-based presentation, so we needed to design a way to give the reader a bunch of windows to different avenues of exploration.  Not force the data on them but allow them to explore it on their own if they’d like.

Also, there were a lot of numbers in this story, so graphics were the best way to go to present that in the most digestible way possible. We used video because part of the story concerned the actual view of the city and bay area and text alone wouldn’t do the debate justice.

For our timeline, we used a timeline creator called “Tiki-toki” for the “following a car” segment.  For the interactive map, we used Google Fusion.

After this experience, what advice can you offer fellow investigative reporters?
Always file public records requests for communication! Before and after publication. It’s amazing how you can shed light on what is going on behind the scenes with a few key emails, voice mails, texts or letters. They don’t speak for themselves, but they enable you to ask the right questions.  The results also might lead to some great follows. In addition, ask for communication from personal accounts–you might not get it, but it won’t hurt to ask. It also shows that when you ask for communication, you are expecting to receive government business conducted on personal accounts as well.

What do you hope will change as a result of your reporting?
We hope the public and voters are better informed about how elected and appointed officials, as well as candidates for office, are making decisions that will have an impact on their lives. We hope public officials will be required to make public any government business conducted on their personal accounts, just as they must release records showing business conducted on their government accounts.