Login Not a member? Join ( Why? )
Subscribe to the IRE Radio Podcast
IRE News » Behind the Story: The reality of Oklahoma’s Quality Jobs Program 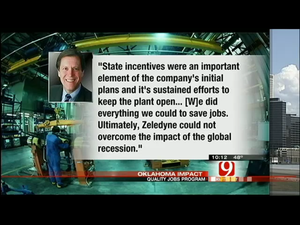 Last month, the Oklahoma Impact Team for KWTV News 9 in Oklahoma City and KOTV News on 6 in Tulsa, Okla., examined the much-touted Oklahoma Quality Jobs Program to see if it works as intended or amounts to a corporate giveaway. They found that three-quarters of a billion dollars in tax rebates have been awarded to approximately 660 companies, some of which have eliminated jobs or sent jobs overseas while collecting payments under the program. Companies met job-creation predictions about one-third of the time.

Alex Cameron and Jeff Raymond of the Oklahoma Impact Team for KWTV and KOTV sent IRE an explanation of the story’s development, including the story idea, the process and the most interesting things that stuck to the cutting room floor. 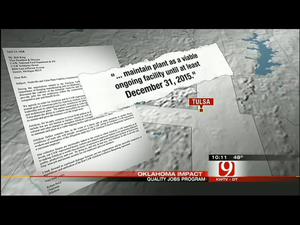 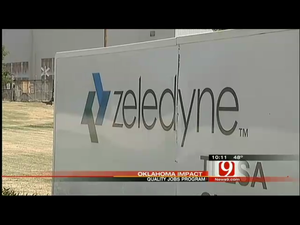 The Oklahoma Department of Commerce regularly issues releases, trumpeting the latest companies to be enrolled in the Quality Jobs Program, and how many new jobs these companies will (not could) bring to the state. The releases, naturally, paint a very sunny picture of the program and its impact on the Oklahoma economy. I’ve always been a bit skeptical. When a local weekly paper ran a story on the program and noted that the majority of companies in the program fall short of their stated job creation projections, I felt that our team could — should — investigate even further.

It was really fascinating to piece together the data and see a general picture of the program emerge.  Specifically, it was eye-opening to discover how many companies fail to achieve the basic benchmark for success in the program.  It was also enjoyable and satisfying talking with people on both sides of the debate surrounding this program – those who have seen firsthand that enrollment in the program doesn’t necessarily mean that a company won’t still lay people off, and those who see the power of the program to attract and keep businesses in the state.

What are some challenges you faced?

The biggest challenges we faced was getting the info in a format we could use. Although it came from the state in a spreadsheet, it was the result of years of different people inputting it differently. We  had to rearrange it and clean it up to make it searchable, which took about two weeks of working on it for part of each day. After that was finished, we had to visually match companies in the program to layoff and outsourcing data; given that there was no easy way to combine them all (at least that we were capable of doing), this had to be done line by line. Because we wanted to triple-check everything, this was very time-consuming. Getting the owner of one of the companies we spotlighted to comment was challenging, although, through his PR rep, we were able to get a statement.

Another significant challenge was making sure the companies we showed as having laid off people while in the program were, in fact, doing so while in the program. In some cases it was clear that the companies and time frames were the same. In other cases it wasn’t so clear, as companies – especially large multinationals – can have many subsidiaries, and WARN notices only provide estimated layoffs and approximate times, while many of the TAA/NAFTA notices don’t provide anticipated layoff dates or numbers. We dropped companies that weren’t clear-cut, and we used very conservative estimates. Overall, the challenges in reporting this story were mostly about data inadequacy and making sure we were fairly characterizing the program and the companies in it. While the state Commerce Department was helpful, there wasn’t as much publicly available info as we would have liked.

What were the most interesting things you found that didn’t make it into the final article?

Of course, there’s always quite a bit that doesn’t make it into the final story, although you certainly try to include the juiciest and most significant items.  One of the more interesting bits of information NOT to be included was the fact that there have been a few companies that have been dropped from the program for significant underperformance, only to reapply — and be accepted! — at a later date.  Some of those companies reapplied under a slightly different name.  We also did not get into all of the circumstances surrounding Zeledyne and its shutdown, although that could have been a story in itself.

We took a list of Quality Jobs participants through the end of March 2012. This list came from the Oklahoma Tax Commission and is the main public document of participants in the program and payments. We calculated job predictions, job creation, early withdrawal from the program and other estimates using this list. We obtained the list through an open records request to the Tax Commission, although a formal request likely wasn’t necessary. To determine whether companies laid off employees while in the program, we used WARN data, as well as Trade Adjustment Assistance and NAFTA assistance data.

There is no publicly available way to track layoffs, so using these sources to approximate layoffs was the best we could do. Although the state Department of Commerce has a searchable database of WARN notices, we asked for the underlying database. They gave us a spreadsheet, which worked out well for our story. As for the TAA and NAFTA notices, although the info is available online, I sent a FOIA to the Department of Labor so we could have the underlying petitions and determinations. This was important for determining actual layoff dates and numbers, and substantiating outsourcing claims.

We purchased the TAA/NAFTA database from IRE to identify companies that outsourced workers, which we then compared to the above letters from DOL. The database, WARN notices and petitions also allowed us to identify the two companies that we spotlighted in the story – one of which closed a plant while taking state funds and the other of which sent jobs overseas while in the program.

Did you use any specific tools to organize and analyze the data? If so, how did they help?

Our analysis was pretty straightforward, technology-wise. We used Excel primarily, both in cleaning up the state spreadsheet (it also came in Excel), calculating estimates and organizing companies for our database. We sent a stripped-down spreadsheet to our programmers to scrape for our searchable online database. We added fields for layoffs while in the program and outsourcing. We thought about doing some more advanced statistical analysis, but it wasn’t necessary for the story, and the data already required a lot of massaging to get into a usable format. We considered adding links in the database to relevant documents but decided instead to include them in the story for the two companies we highlighted.

How did you find the subjects of your story, and decide which ones made it into the final article?

We felt it was important to hear from someone who worked at one of the companies that, ultimately, had an unfavorable outcome (had layoffs, sent jobs out of state, shut down, etc.), and yet still received the program’s tax breaks during the course of its decline.  We decided to zero in on Zeledyne (formerly the Ford Glass Plant), in Tulsa, because of the relatively large number of employees impacted, and because the story of its closure is generally well-known. We decided that, perhaps, the best way to find a former worker would be to go through the UAW.  The head of the local union was very helpful and connected us with the man whose interview very much helped set the tone for the story, not to mention, give us the human angle that every reporter seeks.

As for the others in the story, it was fairly easy to identify the lawmakers who have concerns with the program, and convincing them to go on camera was not difficult.  The Department of Commerce helped us find a recent program enrollee – Malarkey Roofing – so that we could show that many companies are doing well and meeting expectations.

How did you attempt to get sources, particularly the commerce secretary, to speak openly with you?

We set out, from the beginning of our investigation, to work openly with the Department of Commerce, and not, in any way, hide what we were working on.  We knew we would need, not only their cooperation, but also their insight, in order to produce a comprehensive and balanced story.  The secretary and his staff were more than willing to discuss the program with us, and, over the course of several meetings, they could see that our intent was to understand the program as well as we could, so that we could report on it accurately.  I believe Secretary Lopez would have given us an interview, even if this had been a day-turn story, but the fact that we put so much effort into our research, I believe, convinced him to give us more time and to speak, perhaps, more frankly.

I would say that, as time-consuming as this sort of research and data analysis can be, the results may well be worth it, in terms of the public service provided and the on-air product.  Corporate tax incentives are a hot topic right now, nationally and locally, as governments look for extra revenues, but without having to ‘raise taxes.’ A story like this one taps right into the strong feelings on both sides of the issue.

It is our hope that our reporting will, at least, generate additional discussion about this program. There were efforts during the past legislative session to amend and even do away with the Quality Jobs program, but the measures never came up for a vote.  We know that our story has raised new awareness among lawmakers of the program, and so, perhaps, there will be more vigorous debate during the coming session.

Oklahoma Impact Team Director Alex Cameron can be reached via email at alex.cameron@news9.net or on Twitter via @AlexDCameron.