Login Not a member? Join ( Why? )
Subscribe to the IRE Radio Podcast
IRE News » Behind the Story: How the Milwaukee Journal Sentinel learned about an ATF sting gone wrong 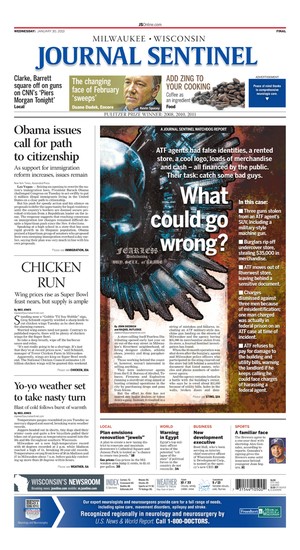 John Diedrich and Raquel Rutledge of the Journal Sentinel had an opportunity to gain rare insight into an undercover government operation in 2012. Their watchdog reporting on the U.S. Bureau of Alcohol, Tobacco, Firearms and Explosives’ sting operation in Milwaukee revealed the operation may have done more harm than good in the neighborhood it was intended to help. The operation’s problems raise further questions about  the agency’s competency in light of the Fast and Furious operation, in which agents sold guns to gun traffickers in Arizona from 2006 to 2011 and failed to keep track of the firearms.

The reporting process began with tips from readers.

Residents in the area contacted the Journal Sentinel after an ATF agent had guns stolen during an SUV break-in in September. In December, David Salkin, the landlord of the Milwaukee building the ATF agents had rented, contacted Diedrich. Salkin claimed the ATF owed him $15,000 for damage to his property.  He also had documents left behind by the agency, including a list of agents’ real names. Diedrich and Rutledge said they were surprised they hadn’t heard about the ATF operation prior to these contacts. The bureau had previously held news conferences for successful stings. No information had been released about the Milwaukee operation.

Contacting federal authorities gave little insight into the sting.  No one could comment because court cases and searches for suspects were ongoing. To determine whether the operation had lead to any arrests or convictions, Diedrich and Rutledge compiled arrest records from state police and federal agencies. They compared federal cases from the 10-month duration of the operation with local police reports and court transcripts. They were then able to connect suspect names, charges and case agents to determine the number of arrests made by ATF agents. The state district attorney’s office and the federal prosecutor confirmed that charges were filed against 33 people.  Three cases have since been dismissed.

The court documents they pulled raised further questions about the operation.  The documents revealed that agents were paying high prices for firearms, and it seemed possible that some sellers may have been purchasing guns to re-sell to agents.  ATF operations are intended to catch serious criminals in high-crime and at-risk areas, but it was unclear from court documents whether any suspects were serious criminals. Journal Sentinel Watchdog team member Allan J. Vestal and others analyzed five years of crime data within a one-mile radius of the storefront.  They found that crime had already been in decline in the area.

Although current ATF employees could not comment on the operation, Diedrich and Rutledge spoke on the record with former agents to determine if these oversights were common in ATF sting operations.  The former agents stated they were concerned by the errors and confirmed these problems were unusual.

“Our job at this point is to shed light on this whole situation and what the government decides to do with the information is up to their decision-making process,” Diedrich said.  Rutledge agreed.  “You don’t ever get a look into something like this,” she said.  She believes gaining insight into an undercover operation has been the most unique aspect of their reporting.  She and Diedrich have since received phone calls from Washington about their investigation.  A group of Congress members have sent letters to the ATF demanding more information about the operation, and the ATF has launched an internal investigation into the operation.  On Feb. 9, Diedrich and Rutledge released an additional report on the burglary of the ATF’s Milwaukee storefront, which resulted in the loss of at least $40,000 worth of merchandise.  In the report, the agency also claims it is willing to expedite processing of the landlord’s damages claim.