Login Not a member? Join ( Why? )
Subscribe to the IRE Radio Podcast
IRE News » Behind the Story: Tracking food waste at a local institution

Forty percent of food grown in the United States goes uneaten, according to the National Institutes of Health. That’s everything from misshapen potatoes left in the field to the half jar of salsa going bad in your refrigerator.

Most of us believe wasting food is bad, but many large institutions write off that waste as a cost of doing business.

Dan Lesieur saw this first hand when he worked at the University of Iowa Hospitals and Clinics, a 711-bed public hospital in Iowa City. He started taking photos on his iPhone in 2009 when he noticed large amounts of prepared food thrown into the garbage or washed down the drain.

“It made me angry and kind of sick to my stomach,” Lesieur said.

The Gazette’s food waste investigation started with 50 photos Lesieur sent us in November 2012. He sent the images under a fake name because he thought he might get in trouble for taking the pictures while he worked in the hospital cafeteria.

The pictures showed dozens of taco salads and piles of bananas in the trash. Untouched trays of chicken marinara stacked in the dish room. Fifteen pounds of packaged pork tossed because it wasn’t prepared before expiration.

To convince Lesieur to open up, I called an employment lawyer who said he didn’t think a former student employee would be sued for taking secret photos while working at the hospital.

Lesieur put me in touch with a hospital cafeteria supervisor who confirmed, off the record, all of the waste Lesieur described. The supervisor was also able to explain how the hospital tracks food in its retail operation, which serves about 7,000 meals daily to hospital employees and visitors.

The hospital uses food service and nutrition software provided by CBORD.  For each menu item, staff record how much was forecasted, prepared and served in a given day. Forecasts at UIHC were based on how much of each item sold the last time they served it.

That’s where I started with my first open records request, filed Dec. 6, 2012:

“I would like access to documents used to track food purchased, prepared, served and thrown away within UIHC’s retail food service for the month of November 2012. This should include daily tracking forms for each type of food and any weekly or monthly tracking documents.”

About a month later, the UI provided me a 1,180-page PDF showing all the hospital’s menu items for November 2012. This document was near impossible to analyze, but I was able to pull out great details – such as the fact that hospital staff threw away 160 servings of meatloaf and 174 servings of au gratin potatoes on Black Friday. 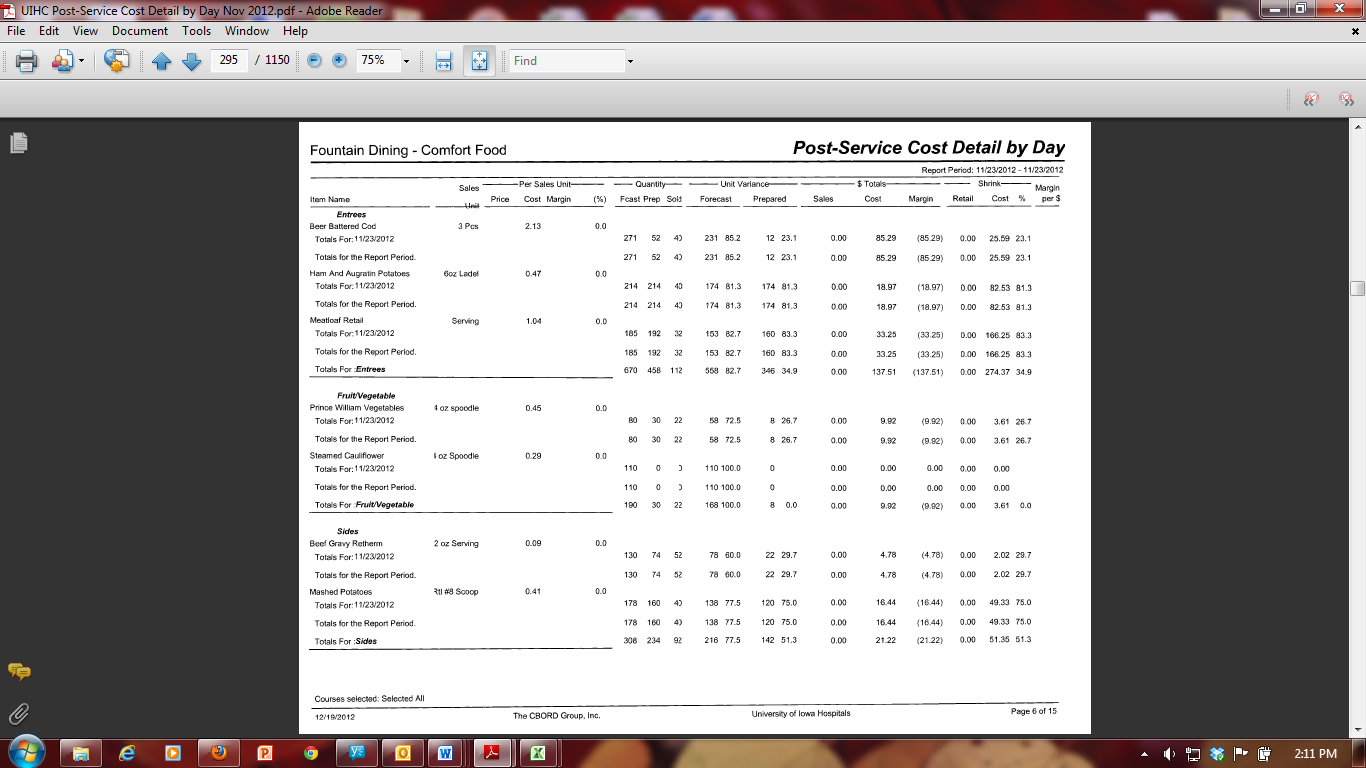 The hospital also summarized the findings in an Excel spreadsheet. This summary showed the hospital “lost” 10 percent of its food from seven dining areas in November 2012. The wasted food from just one month totaled $16,500.

When I talked about this story at the 2012 CAR conference in Louisville, some reporters were amazed the hospital provided this revealing summary. Based on my later interviews, I think they thought they were doing well by limiting waste to 10 percent.

After seeing how much food was wasted in a month, I wanted a year’s worth of data. The UI charged The Gazette $375 for providing a food service summary for 2012.

Wasting 12 percent of pre-consumer food sounded like a lot to me, but I needed some context. I talked with Andrew Shakman, president of LeanPath, an Oregon-based company that provides automated food waste tracking for schools, companies and other institutions across the nation. http://www.leanpath.com/

He told me 4 percent to 10 percent food waste is pretty typical among his clients. He was skeptical that the UI hospitals were really throwing away 12 percent of its food.

But further interviews showed me the hospital really wasn’t using any other alternatives.

I asked for data showing how much food the hospital donated to charity in 2012. They provided an Excel invoice indicating 50 cases of food – mainly frozen bread products and meat – were donated last year to Iowa City food rescue Table to Table. http://www.table2table.org/

Hospital officials told me they could not donate prepared food because of food safety laws, but I talked with the local public health inspector who told me the prepared food could be donated as long as it was kept above 135 degrees or below 41 degrees.

The hospital couldn’t compost its food waste because of plastic and Styrofoam in the waste stream.

All that was left for the story was reaction, and in some ways, that was the hardest part.

Lawmakers – even one who just wrote a book about climate change – didn’t have much to say about the food waste. Food bank volunteers were reluctant to criticize the university. The best I could get from a waste reduction expert was “it’s a little disturbing.”

But, ultimately, the same gut reaction that caused Lesieur to photograph the wasted food seemed to hit Gazette readers.

Within a month of The Gazette investigation, the hospital announced it would remove Styrofoam and plastic from the waste stream. They revised their food preparation system to cook more small batches and talked with Table to Table about donating more food.

A month later, the hospital announced it was opening compost stations in each cafeteria.

I plan to go back and look at the numbers at the end of 2013 to see whether these efforts have made a difference.

Erin Jordan is an investigative reporter for the Gazette and KCRG-TV9 news in Cedar Rapids, where she covers topics that include tax breaks, business incentives and state bonuses. She received the Iowa Newspaper Foundation’s Harrison “Skip” Weber Investigative Reporting Award in 2012. Prior to coming to the Gazette, Jordan was the Iowa City Bureau reporter for the Des Moines Register from 2003 to 2009. She is also board president of the Iowa Center for Public Affairs Journalism, or Iowa Watch. Email:[email protected].