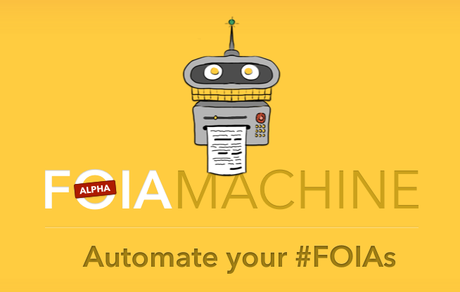 On July 16, a team of journalists and developers launched a Kickstarter campaign for a project called FOIA Machine. They asked for $17,500 to build a tool to help journalists and citizens request public information — a “TurboTax for government records,” the team called it. Two days later, they passed that goal.

A week later, they doubled it. The project, originally sponsored by The Center for Investigative Reporting, had more than $35,000 — $15,000 of which is matched by the Donald W. Reynolds Journalism Institute at the University of Missouri – from 1,131 backers.

Now, FOIA Machine has a promise of $10,000 from The John S. and James L. Knight Foundation if the project reaches 2,000 backers.

“We’re thrilled and amazed at the initial support,” WNYC data journalist and FOIA Machine project manager Coulter Jones said. “I think it shows how hungry people are for government data.”

The tool will be open and free for anyone to use. The Center for Investigative Reporting is home to FOIA Machine until it is ready to go public, when it will be handed over to IRE.

Freedom of information laws are citizens’ and journalists’ best tool for government accountability, but anyone who has filed a request knows they can quickly become mired in exemptions, overwhelming delivery costs and bureaucratic delays. Each state has a different set of laws governing what information is public, how long it is retained and how long officials can take to release it.

“We live in an age when most of us can access data on our smart phones for sports scores, transit and restaurants nearby, but we can’t get public basic documents and government data easily because they are hidden behind bureaucratic loopholes,” Jones said.

FOIA Machine would streamline the process of accessing government information as a web application that provides a dashboard for tracking requests and getting alerts on request status, as well as a platform for sharing templates for requests and other expertise.

The idea has long been an object of desire in the journalism community.

Reporters and advocates of open government have their own ways to track open records. Some use white boards, some use spreadsheets or text documents.

FOIA Machine hopes to provide a tool for requesters to track their own request, which the team hopes becomes a systematic, shared tracking system. Information is sparse on which requests have been fruitful, how long certain requests take and which agencies deny the most requests.

Send a package in the mail, Jones said, and you can track where it is and what’s happening to it every step of the way. Implement that kind of tracking for FOIA requests, and suddenly the ability to assess a government’s transparency becomes much easier.

The desire for such a tool brought the FOIA Machine team together in June of last year at a News Hack Day in San Francisco. A group of journalists from The Center for Investigative Reporting wanted to build a FOIA tracker, and Djordje Padejski, a Knight Fellow at Stanford University, was already working on a similar project. They decided to combine efforts on the project, which they called Bird Dog at the time.

It eventually became the FOIA Machine, complete with mascot. After Kickstarter backing surpassed expectations, FOIA Machine’s creators are stretching their goals. But the project’s long-term funding is still an unknown, meaning the team has to balance complexity with simplicity – the more features a piece of software has, the more debugging it needs, and the more expensive it becomes.

Most of the money is going toward the development needed to go from a prototype with 15 users to a finished product read for public use, which includes 800 journalists who have already signed up to use it. But if the FOIA Machine reaches $50,000, they’ll work on features such as

At $50,000, the team will also host FOIA events in five states, training the public on freedom of information and gaining knowledge to implement into FOIA Machine, making sure its information on local records laws are accurate and up-to-date.

You can get more details on the project on its Kickstarter page or on the FOIA Machine FAQ.