Login Not a member? Join ( Why? )
Subscribe to the IRE Radio Podcast
Transparency Watch » Committee to Protect Journalists releases report on Obama administration and the press 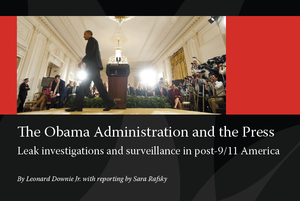 The Committee to Protect Journalists released a report today titled The Obama Administration and the Press, stating that “electronic surveillance programs deter government sources from speaking to journalists.”

President Barack Obama pledged open government as he entered office, but his administration has fallen far short of those promises, according to CPJ. Since 2009, six government employees and two contractors have been subjects of criminal prosecutions under the 1917 Espionage Act, compared to three in all previous administrations. Also, the Justice Department engaged in direct surveillance of the press by issuing subpoenas for reporters’ phone logs and emails.

Compounding journalists’ concerns, according to the report, is the recently revealed extensive surveillance of digital data and phone records by the National Security Administration.

“I think we have a real problem,” New York Times national security reporter Scott Shane told CPJ. “Most people are deterred by those leaks prosecutions. They’re scared to death. There’s a gray zone between classified and unclassified information, and most sources were in that gray zone. Sources are now afraid to enter that gray zone.”

The report was authored primarily by Leonard Downie Jr., an IRE founder and board member, vice president at large and former executive editor of The Washington Post, and the Weil Family Professor of Journalism at Arizona State University’s Walter Cronkite School of Journalism and Mass Communication.

Previously, Downie moderated a panel on the government’s war on leaks at the 2013 IRE Conference in San Antonio: “The Obama administration’s war on leaks is by far the most aggressive that I’ve seen since the Nixon administration, and I go back that far,” he said at the time. The panel included:

Listen to their discussion of why such unprecedented efforts against leaks are happening now, what role journalists play in it, and what’s to be done to keep communications secure and protect sources. Download the audio.