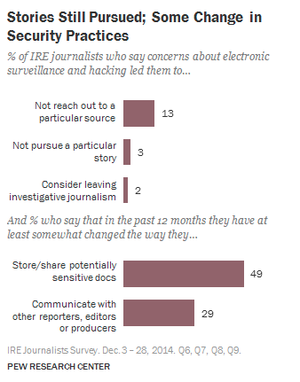 Despite concerns over government surveillance, a recent survey of IRE members found that few have let those worries prevent them from pursuing a story or reaching out to a source.

In December the Pew Research center surveyed journalists who are IRE members about issues including electronic surveillance and digital privacy. Today Pew released its findings, based on confidential responses from 671 journalists, in a report and interactive.

Here are some of their findings: