Login Not a member? Join ( Why? )
Subscribe to the IRE Radio Podcast
IRE Conference Blog » The new muckrakers: The expanding world of investigative journalism 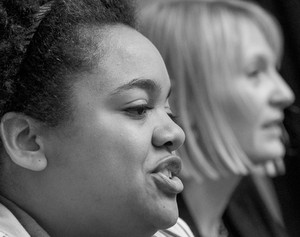 By Miranda A. Strong

The abuses of power and labor that followed the industrial boom of the 1900s inspired journalists to investigate corruption and expose its consequences to the masses. The work of reform-oriented journalists, such as Ida Tarbell who went toe-to-toe with Rockefeller’s big oil, and Upton Sinclair, who took on industry’s treatment of immigrant laborers, was recognized and described as “muckraking” by President Theodore Roosevelt.

Today, journalists continue the muckraking tradition, innovating in an effort to remain as relevant as ever.

“It’s not by design,” VICE News Editor-In-Chief Jason Mojica said when asked how VICE has managed to captivate young readers and viewers. Although Mojica said VICE did not intentionally lay the framework to gain its millennial following, he does recognize the elements of their stories that interest this audience.

“The approach that we brought to current events, such as the crisis in Ukraine, Ebola coverage, Islamic State, is this kind of more documentary-based approach to storytelling,” Mojica said.

BuzzFeed News has a young but vast and loyal audience. The site announced in late 2013 that it would expand into investigative reporting by hiring Pulitzer winner Mark Schoofs of ProPublica.

BuzzFeed owes much of its success to its partnership with Facebook. Although its prevalence in social media is evident, BuzzFeed’s executive editor for news, Shani Hilton, said that BuzzFeed focuses on creating content that can be shared rather than creating strategies that encourage it.

“Facebook is one way in, but, really, it is the person-to-person sharing,” Hilton said.

With the expansion of communities consuming the news, outlets often struggle to keep up with an increasingly diverse readership.

Mojica, a Mexican-American from a working class background, said that he has never made a hiring decision based on race but understands why diversity in the newsroom is important.

“I certainly see, just from a purely pragmatic approach, the value in people from different walks of life and different experiences being able to bring different types of stories and storytelling to the table,” Mojica said.

Betsy Reed, The Intercept’s newly hired editor-in-chief, said that she has seen improvement in newsroom diversity with the push for organizations to pay interns.

Bill Keller, editor in chief of the Marshall Project and former executive editor of The New York Times, recognized the merits of partnership to expand both reach and platform. Keller said that partnering with “old-fashioned newspapers” encourages impact while partnering with multimedia outlets fosters opportunities to create stories on a variety of platforms.

“We learned some things about how to do audio by working with people over at NPR,” Keller said. “NPR for example, because they are doing radio journalism, and we are doing mostly word journalism, the online equivalent of print, they have different needs when it comes to telling stories. And once you get over the initial adjustment, you learn from each other.”