Login Not a member? Join ( Why? )
Subscribe to the IRE Radio Podcast
IRE Journal » Investigative reporter sentenced to prison 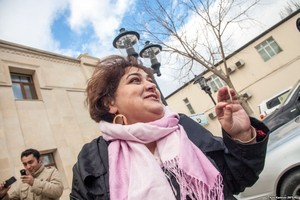 Today investigative reporter Khadija Ismayilova was sentenced to seven-and-a-half years in prison in the country of Azerbaijan.

According to one of Ismayilova’s employers, Organized Crime and Corruption Reporting Project, Ismayilova was found guilty of embezzlement, tax evasion, abuse of power and running an illegal business. OCCRP reports that human rights groups believe Ismayilova’s conviction is politically motivated. She was arrested after investigating apparent nepotism among the friends and family of Azerbaijan President Ilham Aliyev.

Ismayilova was also a reporter for the Azerbaijani branch of Radio Free Europe/Radio Liberty.

Earlier this year, Khadija’s story was featured in the IRE Journal. For more information on how you can help, visit the Khadija Project.

It seemed a typical December day in the Azerbaijani newsroom of Radio Free Europe/Radio Liberty (RFE/RL) when a band of armed police burst in, barking orders at the staff. They rifled through papers, confiscated computers, broke open a safe and took documents.

Over the next three days reporters were in a bizarre, uncertain world. Some fled the country. Others went into hiding. Some were interrogated at length not sure if they’d be arrested. Police told them at times they were looking for fraud, drugs or evidence of a coup plot.

The drama was the natural conclusion of what has become a theatre of the bizarre. Three weeks earlier, their award-winning reporter, Khadija Ismayilova, was arrested. The charges were unbelievable even by Azerbaijani standards. She had allegedly incited a former boyfriend and colleague to commit suicide by denying him a job when he tried to return to the newsroom. The fact that she had no authority over hiring didn’t seem to matter nor did the fact that the ex-boyfriend later recanted all of what he had told prosecutors. Instead, she was held another month and then charged with abuse of power — a particularly Orwellian charge for a journalist who has no power in Azerbaijan. Ismayilova has denied all charges and has continued to accuse the government of covering its corruption by eliminating the last vestiges of a free press.

But if the scene is shocking, it’s not especially surprising for people working in the region. In a world where the march of technology is rapid and unstoppable — global networks, data-scraping tools, easy crowdsourcing — the possibilities for journalistic work ought to be dizzying. But, uncomfortable with such scrutiny, countries have lashed back, cracking down on press freedom. Journalists in Turkey, Russia and China, to name a few, are being detained, questioned and jailed.

The case of RFE/RL and Ismayilova is both disturbing and particularly illustrative.

Many suspect her real crime has been to expose the business connections of President Ilham Aliyev’s inner circle. Ismayilova has reported how the president’s family secretly benefits from gold and silver mining, telecoms and construction projects such as the shimmering steel-and-glass Baku Crystal Hall. This new events center in downtown Baku is is emblematic of the Aliyev’s reshaping of the ancient seaside town which has been gutted and rebuilt as a glitzy version of Dubai.

In 2011 and again in 2014, she showed that Aliyev’s daughters were linked to telecom giants Azerfon and Azercell, benefiting financially from the latter through a series of offshore shell companies — especially troubling given that these companies cooperate with authorities to monitor phone calls and Internet traffic, a power that has been repeatedly used to target journalists and activists.

Throughout her career, Ismayilova has continued her work undimmed by repeated harassment, a particularly abhorrent example of which was an attempt to blackmail her as part of a sexual-shaming campaign. In 2012, a camera was planted in her bedroom, and footage was sent to her with a letter threatening its release unless she “behaved.” Ismayilova went public with the blackmail attempt.

She and her colleagues are deliberate targets of the regime. She was named an enemy of the state in 2009 in a leaked cable President Aliyev said he wished to see a “change in direction” at RFE/RL. Six years later, the organization is operating under unimaginable limits. In March, bureau chief Babek Bakirov was slapped with a travel ban.

Among 180 countries listed in the 2014 World Press Freedom Index issued by Reporters Without Borders (bit.ly/1bUJA2S), Azerbaijan is ranked near the bottom at 160, described as one of the countries where “media pluralism is in the process of succumbing to the increasingly repressive tendencies of rulers clinging to power.”

In another study, by journalist Till Bruckner, Azerbaijan is shown as the second-worst country in the world for persecuting and jailing journalists (when measured per capita — bit.ly/1wFxJlK). Yet it was also the only country in his “10 worst” that maintained outwardly good relations with the international community as a democracy with a moderate regime. Azerbaijan is supported by high-level politicians like former U.S. Rep. Dan Burton, R-IN, a lobbyist for the country who has not ironically said “tolerance is a continuous learning process for all nations, but Azerbaijan has taken impressive steps in just 23 years of independence,” and calls it an important U.S. partner (bit.ly/1BAkAt4). Bogus charges, such as those faced by Ismayilova, are key to avoiding an openly repressive stance.

Other examples include that of Seymour Khaziyev, a reporter for the opposition daily Azadliq, who was arrested in August after defending himself from an attack near his home in Jeyranbatan. He was charged with “aggravated hooliganism” and sentenced in January to five years in prison.

Today, Ismayilova’s lawyer Fariz Namazli says she is doing well. She can only be held for 18 months in pre-trial detention, but could be held indefinitely during the trial itself, so her future is very much still in the balance. Communication is not easy with Ismayilova herself. She has gotten some letters through to the outside world, which have subsequently been published. However, each time a letter gets out, she has been sent to solitary confinement.

But she is in good spirits. She jokes with prison guards and prosecutors, sings opera music with her fellow inmates, and has formed a choir. She’s an inspiration, says Namazli.

Some of Ismayilova’s comfort may come from the fact that reporters outside Azerbaijan have picked up her work and vowed to continue her investigations in an effort called The Khadija Project. Ismayilova was one of the pioneers of cross-border reporting in Azerbaijan. She attended international conferences and trainings of the Global Investigative Journalism Network and was invited to work with the Organized Crime and Corruption Reporting Project (OCCRP). Her first big investigative break came from working with a scraped Panamanian electronic registry of companies she got through OCCRP. In it, she found many of the immediate family members of President Aliyev. She mined the data for a year issuing one big story after another.

Now some of those same journalists who cooperated with her have started The Khadija Project, an attempt to finish many of the stories she was working on.

OCCRP felt it was necessary to show that even an arrest cannot stop the work of investigative reporting. They have been quietly working on finding the assets of the ruling families of Azerbaijan in collaboration with reporters from Maeydan TV — an independent Azerbaijani media organization that was forced to close its offices in Baku and now operates out of Berlin — RFE/RL, and the International Consortium of Investigative Journalists. It is being coordinated by two longtime IRE members, Deborah Nelson and Don Ray. They work with a network of reporters from around the world, including a half dozen of Ismayilova’s colleagues and former students.

The project was inspired by the Arizona Project — an effort by IRE members in the seventies to finish the investigation by Arizona Republic reporter Don Bolles, who was murdered while meeting a source. Early on, OCCRP reporters including Khadija made commitments to each other’s work to always finish each others work if something bad were to happen. Khadija herself made this request to finish her work in the days before her arrest.

Others from around the world can help The Khadija Project by looking up the names of the family members of the three families that run Azerbaijan in public records in their area, volunteering to help report on the Khadija case, sending tips about corruption and wrongdoing by the Azerbaijani government, anonymously sending leaks to our platform, or just sharing their expertise. The list of names and other updates will be posted on the site occrp.org/free-khadija-ismayilova. Reporters can also contact Don Ray at [email protected]

This spirit is illustrative of the camaraderie that can strengthen networks of reporters worldwide who all have their integrity and sense of purpose in their common work.

Igor Spaic was born in Sarajevo, Bosnia and Herzegovina, in 1990. He has a University of Buckingham degree in political science and international relations and has been a journalist with the OCCRP since 2014.

Michael Mattson is an intern with the OCCRP in Sarajevo. He is studying political science and international affairs at Northeastern University in Boston.