Login Not a member? Join ( Why? )
Subscribe to the IRE Radio Podcast
IRE Conference Blog » How to write an unforgettable data story 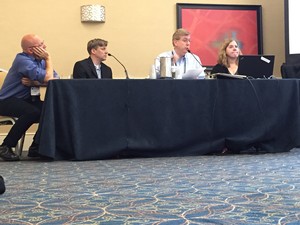 “Just make sure if you fail, you did what you wanted to do.”

“Make your stories sound like you,” Dedman said during the panel. “Use your voice.”

Dedman, along with award-winning journalists T. Christian Miller of ProPublica and Dylan Purcell of The Philadelphia Inquirer, hosted the session outlining how to use numbers and digital data to tell compelling stories.

During the panel, which was moderated by Jennifer LaFleur of the Center for Investigative Reporting, Miller encouraged journalists to include only a few numbers in data stories. Hundreds of numbers may be used during the data analysis of the story, but not all of them should be included in the piece.

“Don’t show off the fact that you know how to use an Excel spreadsheet,” Miller said. “There should be one or two or three numbers in a story.”

Purcell added that it’s imperative to “personalize the numbers.” In a story filled with statistics, charts and graphs, “adding a face,” or using a person to illustrate the numbers can help to move the story along.

Throughout the discussion, Purcell also highlighted the importance of being a good listener. Sometimes people can provide new data that may not be on spreadsheets.

No matter where the data comes from, Miller said it’s important to be transparent with readers. Investigative reporters have a duty to describe the data sources used in a story while explaining how the information was analyzed.

The audience was filled with investigative journalists, students and recent graduates. Among those in attendance was Asaf Shalev, a recent graduate of the Columbia Journalism School.

Shalev said that, after the panel, he better understood the power of data in investigative stories.

“Data can be the backdrop for a story that’s just about people and about the same kind of things that have always been interesting in journalism,” Shalev said.

“My big takeaway is that data can be a lot more interesting than I maybe thought,” Shalev said.

LaCrai Mitchell is a 2015 IRE Conference Knight Scholar and a senior broadcast journalism student at Florida A&M University in Tallahassee, FL. Mitchell, an aspiring long-form producer, is an Academy of Television Arts & Sciences’ student Emmy award-winning producer. In addition to working with student media at FAMU, Mitchell has interned with CNN International Newsource in Atlanta, GA and will return to CBS News in New York City for a second time this summer.