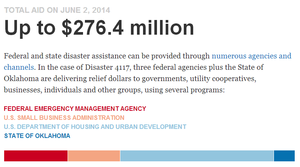 An investigation by Oklahoma Watch and KGOU found that almost three-fourths of the people who applied for FEMA aid following the killer twisters in Oklahoma last year were rejected.

While tens of millions of dollars in state and federal aid were released following the storm, the process of receiving and using those funds hasn’t always gone smoothly.

According to Oklahoma Watch:

“At least three cities and a school district had requests denied because the damage was determined to be unrelated to the disaster. Others were turned away because the project was too small, under $1,000, to be eligible for FEMA assistance or they failed to meet bidding requirements, according to FEMA project worksheets.”

Click here to read the series, “Auditing the Storm: Disaster 4117.”