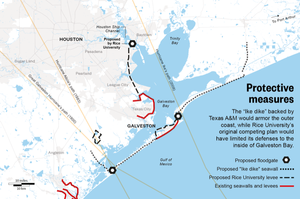 A Reuters analysis of RealtyTrac data for the third installment of the “Water’s Edge” series found that at least $1.4 trillion worth of businesses and homes line the country’s tidal shores, yet the U.S. lacks a unified national response to rising sea levels. The federal government generally pays to clean up and rebuild after disasters but not to prevent harm from the next one.