Login Not a member? Join ( Why? )
Subscribe to the IRE Radio Podcast
Extra Extra » Crime » Do all 390 inmates on Florida’s death row belong there? 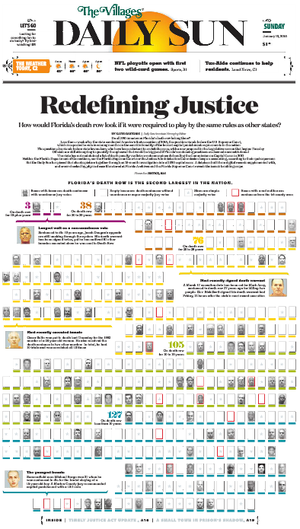 Florida’s death row is the second largest in the nation, but the state for the last several years has not maintained a list of death penalty verdicts or outcomes. The Villages Daily Sun pieced together that information on all 390 capital cases, building a database from digital and physical case files.

The 18-month investigation shows a death row system inflated by simple majority votes. A Florida inmates average time on death row has increased more than two years since the Timely Justice Act was passed in 2013. There also does not seem to be a pattern to the inmate selected for execution by the governor. The exact method is secret to the convicted, the victim’s families and the general public.

The U.S. Supreme Court is expected to rule in the coming months on the constitutionality of the loosest capital punishment requirements in the country.