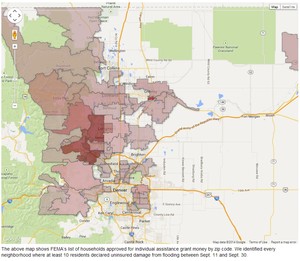 There is a staggering number of federal disaster relief agencies; about 70 in all. Every one of them descended on Colorado last September.

The rapid fall of seventeen inches of rain created home-destroying mudslides, swelled rivers to historic levels and killed at least eight residents. Our station and other media outlets scrambled to cover the chaos in real time. The stories were about human survival and devastating financial loss, but also about hope and faith in something greater.

When the waters receded, our investigative unit refocused on a broader concept – financial aid.

There was no shortage of money coming in to help. By December, the Small Business Administration had handed out $84 million in loans. The U.S. Department of Housing and Urban Development gave $63 million in community block grants. The Federal Highway Administration, trying to fix washed out roads and bridges, was already at its $100 million limit. To assist the public with removal of debris from publicly owned roads, utilities and parks, the Federal Emergency Management Agency also released $215 million.

Our investigative unit was most interested in a pot of money FEMA called “individual assistance.” If your primary home was damaged and your family did not have National Flood Insurance, you were eligible for up to $31,900 in grant funds. The reimbursement was broken down into three categories: basic home repairs, rental assistance and replacement of essential personal property.

The funds had few strings attached. The grant was available without an income requirement. Rich or poor, FEMA vowed to treat everyone the same.

Replacing travertine tiles in million dollar neighborhoods along the Boulder Front Range would surely cost more than replacing linoleum in mobile homes along the river in rural Weld County.

With that in mind, we expected FEMA’s individual assistance averages in the more affluent areas to edge toward the top of the cap. But the statistics showed the opposite.

Households in the poorest neighborhoods on average received far more than the rest – even though it didn’t appear they had greater flood damage. I overlapped census figures to double-check, but visiting destroyed homes in person was all I really needed to see there was something amiss.

I spoke with a woman in an affluent part of Boulder who showed me a bill her family had received to replace a washed-away sewer pipe that ran across the backyard. The bill was for $10,000. FEMA offered them $2,000. The repair bills to the rest of the home (torn deck, broken bricks, roof damage) exceeded $20,000. FEMA gave them nothing for those repairs.

The woman was not complaining – quite the opposite. She was grateful FEMA gave them any money with no strings attached. She said it helped a great deal. Her family expected nothing but received something. The average reimbursement for her neighborhood was around $3,000, even though the damage to nearly every home far exceeded that amount.

When I visited an area surrounding a mobile home park in rural Weld County, I found that homeowners routinely received checks from FEMA for the full $31,900 cap amount. The 377 households in the wealthier Lyons ZIP code received a total of $6.5 million. That is an average of just $17,300 per household.

We had many questions for FEMA regarding its assessments and its sub-contracted assessors that went unanswered. The agency declined our repeated requests for an on-camera interview to address our findings.

I understand that using averages doesn’t work in all cases. In theory, more homes with less damage in a wider geographic ZIP code could steer a reporter in the wrong direction. But this story was solidified by putting feet on the street. We found FEMA repeatedly low-balled homeowners who had the financial resources to recover without the aid. Some might say that means the “individual assistance” program is a well-run government program. To others, it’s unfair as long as FEMA hangs on to the “no income requirement” clause.

Getting the data was a chore.

FEMA routinely releases county-by-county breakdowns of aid distribution, but we found these too broad to analyze. We asked the agency to provide ZIP code-specific data. But it was clear from many phone conversations with both national and local representatives that obtaining the exact address of the disaster relief applicant was going to be a long fight. Although every journalist should be grateful for the South Florida Sun Sentinel’s three-year battle over similar records during hurricane coverage a decade ago, such a fight wasn’t essential to our initial mission.

The ZIP code data arrived after about a week and at no cost in Microsoft Excel format. There was no column for “home repairs,” even though that was where the bulk of the money was being handed out. To calculate it, I used a simple formula to subtract the essential personal property and rental money fields from the total column. The total amount of aid for Colorado flood victims compared to the “sum totals” of the ZIP codes in the database was slightly off.  That’s because FEMA withheld figures from ZIP codes where fewer than 10 people received aid. We let our viewers know this even though it was statistically insignificant. I figure that as long as you tell viewers and readers the process (and admit imperfections in data) there will be fewer “you’re an idiot – the numbers don’t add up” emails.

Although I have used Google Maps in the past to create visual elements for the web versions of my investigations, I am not proficient. I do like to play around with graphics. Every try is a learning experience. For this FEMA story, I received some terrific help from our digital content manager, Thomas Hendrick. I cleaned up all the data. He color-scaled the ZIP codes and added other statistical elements that made it both informative and entertaining to click around and see how much money each flooded area received.

Even though we did not find all the answers about why FEMA assessors acted unequally, we still plan to turn to this data when it floods again.