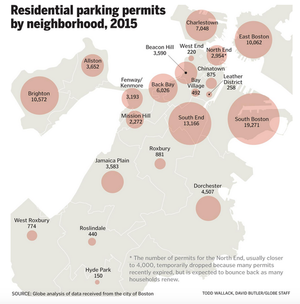 In dense cities like Boston, few topics are as contentious as parking. Everyone has a complaint. Everyone has a personal story about driving around aimlessly trying to find a space – especially in winter when snow gobbles up many of the available spots.

So some residents were understandably outraged after I reported in the Boston Globe that others appeared to be taking up more than their fair share of spots.

One wealthy couple in Boston’s South End had permission to park 11 cars on the street at a time, according to the city’s parking permit database. A woman in the North End had five permits – and admitted she kept almost all the vehicles on the street at one time. (She told me she had only one private parking spot.)

And they weren’t alone. Overall, more than 300 Boston households had snapped up five or more parking permits, potentially making a difficult parking situation even worse. Nearly 1,200 household had four or more permits.

hy so many? It turns out that unlike some other major cities, Boston offers residents an unlimited number of residential parking permits for free – one for every car they own. So there’s little deterrent against signing up for as many as possible.

To be sure, the permits don’t guarantee residents a spot – just the right to park if they can find one. But the more permits the city grants, the harder it has become for residents to find parking.

Indeed, I found the number of parking permits had climbed nearly one-quarter over the past decade. That meant even more cars were playing a game of musical chairs, circling the block looking for spaces.

I originally requested the residential parking permit database because our newspaper’s chief librarian, Lisa Tuite, suggested it could be an excellent source of names, addresses, and phone numbers to track down residents.

She was right. In addition to phone numbers and addresses, the database also contained other valuable information, including the make, year and license plate number for every vehicle with a permit. Overall, it had nearly 94,000 rows.

For instance, we used the data in November, when the city tweeted a picture of a BMW blocking a fire hydrant in front of a burning apartment building. The tweet was picked up by the Globe and other media. But no one knew who owned the car – at least until I typed the license plate number into the permit database and found the owner’s name, address and phone number. I passed it on to an editor and a colleague quickly tracked down the owner for an interview.

But getting the data was the biggest challenge. The city initially insisted the data was exempt from the state’s open records law because of the federal Driver Privacy Protection Act – the law that restricts access to driver’s license information.

I appealed to the Secretary of State’s office, which oversees the Massachusetts public records law, pointing out that the permit data didn’t come from the state’s driver’s license database. The information came directly from residents who filled out parking permit applications and, therefore, the federal restrictions didn’t apply.

It took eight months, but the Secretary of State’s office, eventually agreed with me and ordered the city to release the data. But two neighboring Massachusetts cities, Cambridge and Somerville, are continuing to fight the state’s ruling, blocking me from expanding my analysis elsewhere for now.

Cost has also been a challenge. Cambridge, for instance, wants to charge $330 for the data – or $110 per hour – and strip out the names, addresses, phone numbers and other key information for the database. The city said it is simply passing along the cost from its vendor, but couldn’t produce a written estimate or contract to back up its assertion. I am also appealing the charges to the Secretary of State’s office.

In contrast, Boston’s fees were more reasonable. The city originally charged me $45 for the data last year, and then dropped the fee to $30 when I asked for an updated version shortly before writing my story.

Though I initially obtained the data to use as a reference tool, I quickly started doing some simple queries to look for patterns. I wanted to see where the permits were concentrated. I was curious whether there had been changes in the number of permits over time. And, of course, I checked to see how many permits each person owned.

Frankly, before I looked at this data, I had no idea some households had so many permits. And either did the city.

When I mentioned to a city transportation official that one household appeared to have a dozen permits, the city worker asked me for the family’s name and address to verify that it wasn’t a mistake. The next day she reported back – the household only had 11 permits, the 12th had recently expired. But she insisted all 11 permits were legal.

I first analyzed the data using Excel pivot tables (since I originally received the data in that format). I then imported the data into a database manager, MySQL, and ran the numbers again to make sure my totals were accurate and perform additional queries.

I also noticed many permits were issued two years ago, making me wonder whether the permits were still valid. It turns out they were. Unlike many other cities, which require permits to be renewed every year, Boston generally issues permits for twice that length of time. And the city acknowledged it did nothing to make sure residents still lived in the city in the meantime. That means some people could continue to use a permit for months or years after moving to the suburbs.

The bottom line: Academics who study parking said Boston just wasn’t doing enough to manage the city’s parking inventory. Indeed, the city couldn’t even say how many parking spots there were in the city, let alone how many were occupied at any moment in time.

My editor, Scott Allen, helped me sharpen the story by asking good questions. And our graphics artist, David Butler, helped create a few simple charts to illustrate the growth in parking permits over the years and their concentration in certain neighborhoods.

The city’s response was swift. A new parking commissioner (who was appointed just before the story appeared) immediately vowed to review the city’s rules. She also promised to consider charging for permits for the first time and limiting the number given to any one address. The city also vowed to conduct an inventory of the city’s parking spots for the first time in memory. A Boston Globe editorial writer and readers chimed in with similar calls to review the rules.

Todd Wallack is a reporter on the Boston Globe’s Spotlight investigative team. He specializes in data, public records and financial stories. Contact him at [email protected] or follow him on Twitter @twallack.