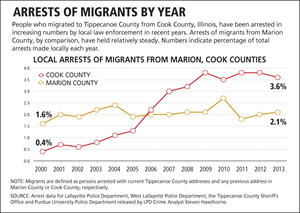 The Journal & Coureir used U.S. Census data to look at migration between Chicago and Tippecanoe County.

Fueled by the accompanying uptick in crime and diversity, a common perception among locals holds that an influx of low-income black families displaced by Chicago’s Plan for Transformation (the dismantlement of public housing high rises) has flooded Tippecanoe with populations that bring crime and strain social services. As a result, Chicago transplants are frequently viewed with a skeptical eye.

The Journal & Courier’s goal was to fact check that perception using hard data. The results of our four-month investigation were published Oct. 16 in a two-part series, available at www.jconline.com/ChicagoMyth, and launched an ongoing discussion on race relations in our community.

Social welfare reporter Mikel Livingston took point on gathering housing and migration data. The Chicago Housing Authority’s tracking data, along with interviews with experts and research on Chicago migration patterns, quickly confirmed for us that there was no evidence of a mass migration of public housing or Section 8 clients out of Chicago in the wake of the Plan for Transformation. But we knew that people from Chicago have moved to Tippecanoe County – no surprise considering Tippecanoe’s proximity to Chicago, its strong schools and safe streets. We wanted to quantify that and see just how many people were migrating between Chicago and Lafayette. To do so we called upon the U.S. Census Bureau and USA TODAY data guru Paul Overberg. Both suggested the American Community Survey’s five-year county-to-county migration datasets would be the most accurate for our purposes.

Available through American FactFinder in overlapping five-year sets, the data provided estimates of the number of people migrating among all counties in the United States by their county, state and country of origin. The data for each period come sorted by 38 columns. The number of rows – approximately 300 in Tippecanoe County’s case – vary depending on the county and time period in question.

Using Microsoft Excel spreadsheets, we sorted to find the most frequent origins of migrants coming into Tippecanoe. The data show that in each five-year span, the number of those migrating between those two counties remained similar – around 3 percent of those moving into Tippecanoe County originated from Cook.

In addition to looking at that data by five-year period, we took the first and last data sets – comprising years 2005-09 and 2008-12 – and viewed them as one time period to get a broader look at the total estimated number moving in. Although there was one overlapping year, those sets gave us the least amount of overlap of the data sets available and showed us an estimated 1,400 people migrated from Cook to Tippecanoe during that period. Considering that one year overlap, the true number of migrants from Cook to Tippecanoe therefore is likely fewer than 1,400 people.

The five-year data, which was not collected prior to 2005, did not allow us to go back in time as far as we would have liked. But the fact that many city leaders pointed to 2007 as the approximate year the perceived influx began made us confident that the data sufficiently covered the most critical time period.

We were unable to account for the race and income level of those movers because such demographics weren’t broken down in both five-year data sets. (Researchers asked different questions in each, preventing demographic comparisons from one five-year period to the next.) But we were able to utilize one-year ACS migration data, which does contain such a demographic breakdown. Placing inflow and outflow data from the one-year datasets side by side in Excel gave us a picture of the net population change during each year and a closer demographic breakdown of incoming movers. The nature of the five- and one-year datasets prevented us from comparing the two, but the one-year data showed that those coming into Tippecanoe County were not limited to just black and low-income families.

But the most data-intensive aspect of this project was, by far, the analysis of arrest data gathered from the four local police agencies in Tippecanoe. Criminal justice reporter Steven Porter and data editor Jennifer Christos led the charge, working closely with the Lafayette Police to request a database of every arrest made since 1999. Once compiled, using Microsoft Access and Excel, our massive spreadsheet listed more than 165,000 arrests with 213,000 preliminary charges.

The data included race, ethnicity and age information but no names, since juvenile arrests were included. Using pivot tables, we were able to efficiently track arrest trends by demographics. That revealed a steady climb in arrests of blacks, who were already over-represented in comparison to the county’s racial makeup.

The data also included each defendant’s place of birth, former addresses and current address at the time of arrest. Since our project was primarily interested in tabulating migration-related data, we tailored our crime research into a specific question: “How many times each year do local police arrest suspects with current addresses in Tippecanoe County and former addresses in Cook County?” Getting that answer, however, wasn’t simple.

Although the police were quite accommodating and provided a custom database free of charge, their data required an extensive amount of cleaning. We couldn’t simply search for “Chicago” addresses, for instance, because the city’s name was misspelled at least 16 different ways in police records. So we used string-splitting formulas in Excel to isolate city and state data from each defendant’s full address, then we verified each record, manually standardizing the city names.

In addition to correcting spelling, we reclassified each address by county, so the arrest records would more comfortably align with the county-based migration data. Working in Excel, we added six columns to our database and used a simple true-or-false value (1 or 0) to indicate which defendants had previous or current addresses in each of the three counties in question.

Keeping these true-or-false values spread out across six columns preserved the detail of our data set and enabled us to easily identify those arrested with any combination of current or former residences on record in Cook, Tippecanoe and Marion counties.

Charting that data over time revealed that there’s been an increase in recent years in the number of locals arrested with previous addresses in Cook County. But we found no data suggesting a link between crime and public housing or the Section 8 program. Social policy experts told us the crime data speak to larger community concerns, especially in light of racial disparities pervasive in justice systems nationwide.

Several other pieces of data helped flesh out our report, including data from our local housing authority on all incoming and outgoing Section 8 vouchers and their origins and destinations since 1996 and client data from our local social service agencies. Both showed no sudden influx.

Mikel Livingston, a reporter at the Journal & Courier since 2010, covers social welfare issues. Steven Porter has covered the criminal justice system for the Journal & Courier since April and previously he worked as a reporter at the Frankfort Times. They may be contacted at [email protected] or [email protected] or on Twitter at @mikellivingston and @StevenPorterJC.