Login Not a member? Join ( Why? )
Subscribe to the IRE Radio Podcast
IRE News » Nominations due April 1 for Don Bolles Medal 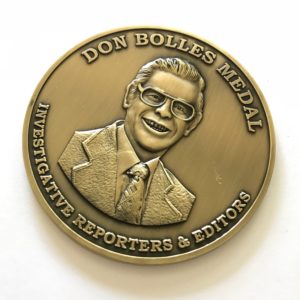 Do you know an investigative journalist who has exhibited extraordinary courage in standing up against intimidation or efforts to suppress the truth about matters of public importance?

Please take a moment right now to nominate that person for this year’s Don Bolles Medal. The nomination form can be found on our website.

The IRE Board created the honor in 2017 as a way to draw public attention to the difficult circumstances under which some of our colleagues are forced to operate.

In 2017, the first Don Bolles Medal was bestowed posthumously to Mexican journalist Miroslava Breach Velducea, who was assassinated in retaliation for her efforts to expose organized crime and corruption.

Last year, it was awarded to Reuters journalists Wa Lone and Kyaw Soe Oo, who were imprisoned while reporting on human rights abuses in Myanmar.

Bolles’ death came a few days before the first national IRE conference in Indianapolis, where the veteran reporter had been scheduled to speak on a panel. At the time, Bolles had been investigating allegations of land fraud involving prominent politicians and individuals with ties to organized crime.

Please help us to pick the next recipient of the Don Bolles Medal.