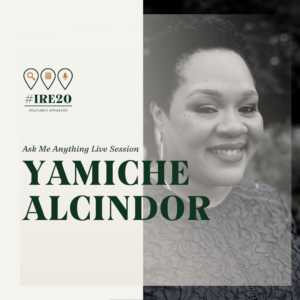 Yamiche Alcindor is the White House correspondent for the PBS NewsHour and often tells stories about the intersection of race and politics as well as fatal police encounters. She’s recently reported on the RNC and DNC, so bring your politics questions for her “Ask Me Anything” session at #IRE20! 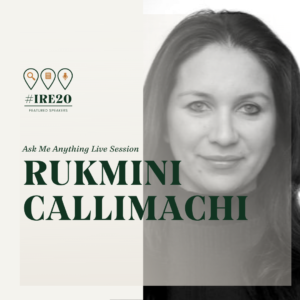 Rukmini Callimachi of The New York Times will host an “Ask Me Anything” session at the #IRE20 virtual conference. Her investigative reporting has illuminated the inner workings of Al Qaeda, ISIS and the Russian bounties. Before joining the Times in 2014, she worked for seven years covering 20 countries in Africa for The Associated Press. 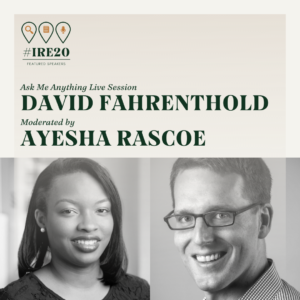 David A. Fahrenthold is a Pulitzer Prize-winning reporter for the Washington Post covering the Trump family and its business interests. He has been at the Post since 2000, and previously covered Congress, the federal bureaucracy, the environment and the D.C. police. Fahrenthold also is an on-air contributor to NBC News and MSNBC. The Ask Me Anything session will be moderated by Ayesha Rascoe, who is a White House reporter for NPR. 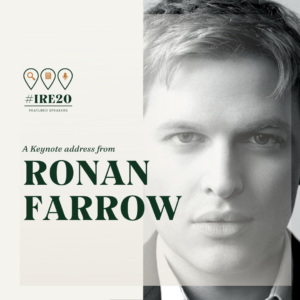 Acclaimed journalist Ronan Farrow will deliver the 2020 keynote address at the IRE20 virtual conference. Farrow is author of the best-selling “Catch and Kill: Lies, Spies and a Conspiracy to Protect Predators.” His 2019 book details his efforts to investigate allegations of rape, sexual assault and abuse of women by powerful Hollywood producer Harvey Weinstein and allegations of intimidation and cover-up by powerful institutions including the news media. 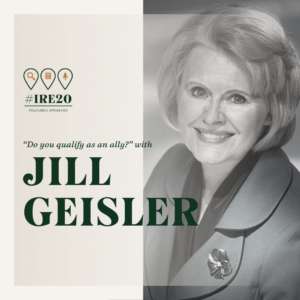 Jill Geisler is known internationally as a teacher and coach of leaders in media and beyond. She developed and guided key management and leadership programs of the Poynter Institute for 16 years and continues to be the go-to expert when leaders need help managing change, improving their culture and teams, tackling ethical challenges or building their individual leadership skills. She is the Bill Plante Chair in Leadership and Media Integrity at Loyola’s School of Communication and a fellow in women’s leadership at the Power Shift Project. She’ll share 10 key ways YOU can earn the right to be called a “trusted force for good” during her “Do you qualify as an ally?” session at #IRE20. 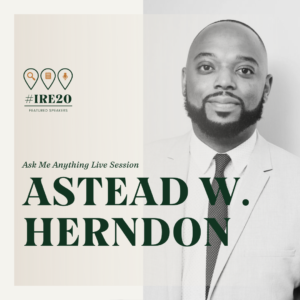 Astead W. Herndon, national political reporter for the New York Times, has developed an audience of 170,000+ on his popular Steadman account on Twitter. He’ll be featured in an “Ask Me Anything” session at #IRE20, so bring all questions about politics and social media! 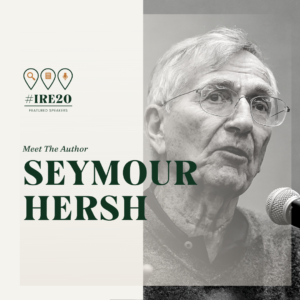 Seymour M. Hersh will be featured in a “Meet the author” session at #IRE20. He has produced blockbuster stories since the late 1960s and wrote his first piece for The New Yorker in 1971. His journalism and publishing awards include a Pulitzer Prize, five George Polk Awards, two National Magazine Awards, and more than a dozen other prizes for investigative reporting. His latest book, “Reporter: A Memoir,” was published in 2018. 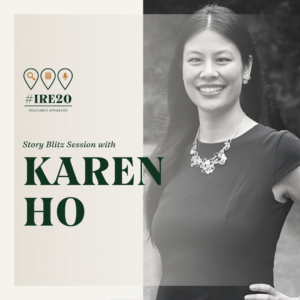 Karen K. Ho is a reporter at Quartz covering global finance and economics. She’ll be part of a fast-paced, 30-minute session that will give you months worth of investigative and watchdog story ideas on the business and labor beat. Be sure to attend her “Story idea blitz: business and labor” session at IRE20. 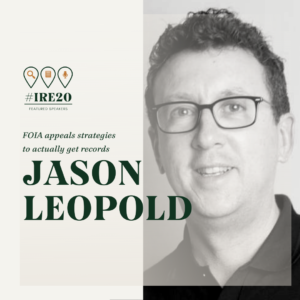 Jason Leopold of Buzzfeed News will speak during a “FOIA appeals strategies to actually get records” session at #IRE20. Leopold is a senior investigative reporter for BuzzFeed News and a 2018 Pulitzer finalist for international reporting. He received the IRE 2016 FOI award and was a 2016 Newseum Institute National Freedom of Information Hall of Fame inductee. 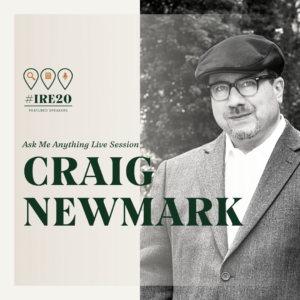 Craig Newmark is a web pioneer, philanthropist and leading advocate. Most commonly known for founding the online classified ads service craigslist, Newmark works to support and connect people and drive broad civic engagement. Conference attendees should bring any and all questions for Newmark’s “Ask Me Anything” session during #IRE20! 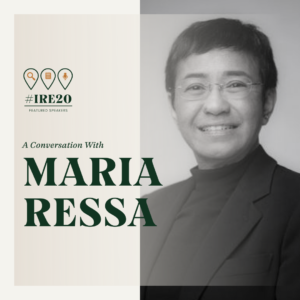 A journalist in Asia for nearly 35 years, Maria Ressa co-founded Rappler, the top digital-only news site that is leading the fight for press freedom in the Philippines. Ressa was named Time Magazine’s 2018 Person of the Year for her work on disinformation and “fake news” and was among its 100 Most Influential People of 2019. #IRE20 attendees undoubtedly will be inspired during “A Conversation with Maria Ressa.” 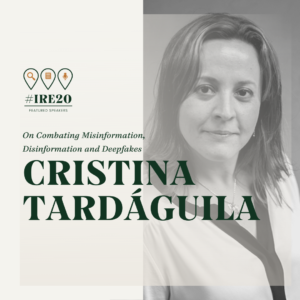 Cristina Tardáguila is the International Fact-Checking Network’s Associate Director. Since 2014, Tardáguila has dedicated her professional life to verification. She is the founder of Agência Lupa, the first fact-checking initiative in her home country of Brazil, and also responsible for LupaEducação, its educational branch. Learn the latest tactics during the “Combating misinformation, disinformation and deepfakes” session at #IRE20. 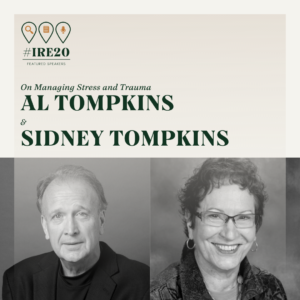 Al Tompkins of Poynter and Sidney Tompkins, a licensed psychotherapist, have been working with newsrooms to help journalists manage traumatic stress. Now, with nonstop coverage of the coronavirus, self-quarantines, racial injustice and economic fallout, journalists are facing an unprecedented amount of stress. Join them during their session, “How to manage the stress and trauma of being a journalist,” during #IRE20. 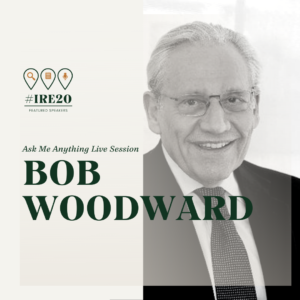 Investigative journalist Bob Woodward will be at the #IRE20 virtual conference for an “Ask Me Anything” session. Bring your questions and get his advice on reporting and writing, including topics covered in his bestsellers, including “All the President’s Men” and his latest book, “Fear: Trump in the White House.”