A conversation with Rachel Lenzi of The Blade 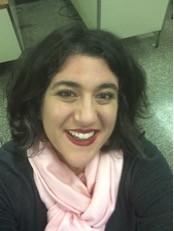 At the IRE Conference in Philadelphia, 2015 Knight Scholar Amber Johnson talked with attendee Rachel Lenzi, a sports writer at The Blade in Toledo, Ohio. The following Q&A has been edited for clarity.

Q: What got you interested in journalism, and why sports?

A: It was the simple fact that I love to write and I love sports. I grew up not only in a household where we were encouraged to take part in organized sports, but a household where both parents were educators who set high standards: Get good grades, be responsible, set goals for yourself, and read everything: books, magazines, newspapers. We subscribed to The Washington Post, The Baltimore Sun and The Annapolis Evening Capital in our house, so every morning there was a competition between my father and I over who read the sports page first.

I grew up reading the work of Christine Brennan, Rachel Nichols and Tony Kornheiser at the Post, and Buster Olney and Mike Littwin at the Sun. Reading their work encouraged me to pursue sports writing.

It wasn't until years later, when I got into doing enterprise work, that I realized how much of a prism sports is for society.

Q: You attended Chatham University in Pittsburgh. How has your experience at a women's college influenced your work?

A: This is a really good question, and it goes back to what going to a women's college instilled in me. Being in an environment of all women not only helped me to find my voice and build confidence, but also to learn the values of respect, order, empathy, confronting without being combative and self-awareness, traits that are valuable in journalism and for working with people.

Plus, going to school in Pittsburgh, a sports-crazy city, and interning in magazines and newspapers helped me realize how competitive this field is. Escaping the bubble of a women's college was necessary in that respect.

Q: What is your goal?

A: To communicate societal issues through sports. Again, so much of society touches sports. Look at Baltimore during the Freddie Gray riots. An entire stadium was empty for safety reasons. Sexual assault cases that involve college athletes. Domestic violence and the NFL.

On the flip side of that, strides have been made in women's athletics because of Title IX. NHL player Andrew Ference is an advocate for environmentalism. John Urschel is an NFL player and mathematician.

Here's an example of society and how it intersects with sports: In September of 2010 I wrote a Sunday story for the Portland Press Herald/Maine Sunday Telegram about Muslim high school athletes who observe Ramadan. There is a substantial Muslim community in Portland, Maine, and some of their children played high school soccer or ran cross country, and they fasted during Ramadan, meaning that they could not eat or drink from sunrise to sunset over the course of a month. They also had to practice for 3-4 hours a day. The Sunday story explored what Ramadan is, how these athletes prepared themselves, the support they received from the public and private schools they attended and also got insight from Muslim community leaders about the practice of fasting and adhering to the Muslim faith.

Q: Describe yourself with one word and tell me why you chose that word.

A: Self-motivated. So much of this industry relies on self-motivation. Asking a question. Submitting a records request. Managing your time because you're multitasking, trying to balance a beat, an in-depth project and your personal responsibilities. Nobody else is going to do this for me.

Q: Do you have any advice for those who are interested in journalism but don't know where to start?

A: Read everything. The ideas you come across spur ideas of your own. Get real-world experience. Answer phones at your local paper on a Friday night during football season, and talk to the people in the newsroom when they're not on deadline. Join a professional organization as a student member - I am a member of and an advocate for the Association for Women in Sports Media. Reach out to reporters to ask questions about what they do.

Amber Johnson is a 2015 IRE Conference Knight Scholar and a rising sophomore at Spelman College studying political science. She is the business manager of the Maroon Tiger Student Media Group for the 2015-2016 school year. Her interests include investigative reporting with a focus on the juvenile justice system the school-to-prison pipeline.