A conversation with Tonya Simpson of WTMJ-Milwaukee 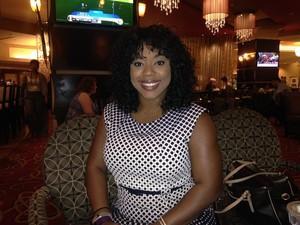 At the IRE Conference in New Orleans, 2016 Knight Scholar Aliah Williamson spoke with Tonya Simpson, executive producer of the investigative team and special projects at WTMJ in Milwaukee, Wisconsin.

Williamson: What interests you about investigative journalism?

Williamson: What do you do as an executive producer?

Simpson: As the Executive Producer, I pretty much supervise the investigative unit. I work with the reporters and producers to come up with story ideas, I approve story ideas, I come up with story plans as far as who do we want to talk to and what do we want it to look like. I create our calendar and decide when stories are going to air. I work a lot with our creative services team to come up with promos and social media pushes. I am very hands-on with scripts and final versions of the stories.

Williamson: How do you bring creativity to the newsroom and your investigative stories?

Simpson: As far as creativity with stories, I like doing stories that are enterprise. I am always looking for stories that nobody else is telling. I talk to people everywhere I go. I ask a million questions about everything and so I feel that separates our content from other markets. As far as creativity visually, I work with some awesome photographers. We talk about the vision for stories so they know what it looks like and they give us a lot of ideas. We also have a pretty big graphics staff so we are able to do a lot of animations. One example is, we were covering an officer-involved shooting and we couldn’t get the video, but we had all the details and our graphics department literally did an animated recreation of the whole shoot-out. They created this really powerful animation and it was something that no other station did.

Williamson: What are some specific stories that you find yourself drawn to covering?

Simpson: Two of the things I’m passionate about are education and mental health issues. I have always been passionate about education. I know that it is one of the things that got me from where I was from to where I am. I grew up in the projects on the southside of Chicago and I realized very early that school was going to be important if I wanted to do better. So I volunteer at a high school in Milwaukee and I talk to the young women about the importance of them staying in school and getting a secondary education. So any education issues, I am super passionate about. Mental health is a new thing. I got out of news and I got a job with the Milwaukee County Department of Health and Human Services. I was their spokesperson. And as part of my duties, I got to work with the mental health hospital. I just learned a lot in the time I worked there. I met a lot of patients and people suffering from mental illness in the community, and I worked with those people on panels and focus groups. I realized how big of an issue it is and the stigma attached to it, and that mental illness wasn’t at all what I thought it was before I got that job. So that became a passion of mine through that job.

Williamson: How do you feel that you have brought more awareness to your passions through your work?

Simpson: We have done a few stories on the mental health hospital in Milwaukee as it is going through a lot of changes in the last few years. They are actually trying to close the mental health hospital and make it community-based. Research has shown that this actually works better because the mental health hospital in Milwaukee is like a jail. So we’ve just been able to keep the community updated on the process as it happens and tell both sides of the story. I understand that there is another side to the story. The community is scared and there is a lot of ignorance about mental health issues. So there is a big contingent of people in Milwaukee who are pissed off and frightened and feel like they don’t want mental health people in their communities and neighborhoods. So every time there is a new development, I make sure that it makes it into a newscast. As far as education, same thing. The Milwaukee Public School system has been going through a lot of changes right now. The county executive has just gotten a commission from state lawmakers to take over underperforming schools. It is a huge issue. Some people feel that it is a good idea; others, such as teachers, think it is a terrible idea. I have been making efforts to talk to the main players and using my connections to report the main issues.

Williamson: If you could only do your job with one tool or skill, what would you choose and why?

Simpson: I think it’s almost impossible to be a good journalist with just one skill, so I will pick a tool. I will say my phone and the reason is, so much happens in the digital space now and so many people get information on their phones and depend on their phones. I can shoot video on my phone, I can get interviews on my phone, I can get all this information to a huge audience with just a phone. So if I could only have one tool, it would be a phone. That is where news is breaking now.