A NICAR newbie goes to Chicago 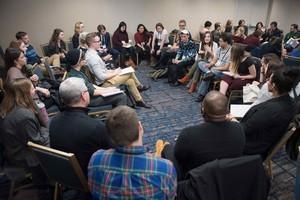 Data journalism is still new to me. Despite that, I decided to dive in head first and attend the recent NICAR conference in Chicago.

It was one of my best experiences as a journalist so far.

I was reluctant to attend after feeling ignored for being "just an intern" at another event last year. But my editor at The Investigative Reporting Workshop, where I now intern, pushed me to go, promising that NICAR would be different. I’m glad that I did.

I arrived late, hungry and eager and dashed into a session on digging deep for radio and podcasts. It was a preview of what was to come over the next few days.

That hour blew my mind.

The conference led me to think about alternative sources for data — even for hidden communities. Bernice Yeung, a reporter for Reveal from the Center for Investigative Reporting, where I interned last year, described how she had to build her own database to report on undocumented workers who experience rape or sexual assault on the job. She recommended that journalists be upfront about the limitations of their data. Mary Hudetz, an Associated Press reporter who covers Indian Country and law enforcement in Albuquerque, New Mexico, said that local nonprofits are often good sources of data not kept by government agencies.

I raced through the the crowded conference floors to make it to as many sessions I possibly could. I heard sessions on investigating hate when the data isn’t there, investigating racial inequalities, investigating immigration and 30 neat tools available for all journalists.

But it wasn’t just the sessions that impressed me. Seasoned data journalists took the time to talk with me about their experience starting in journalism. Despite how large the conference has grown over the years, what hasn’t changed is the willingness of attendees to help young journalists like myself.

Since the conference, I’ve been asked what my favorite sessions were. I’m still processing all the tips offered by some of the world’s best journalists. I’m eager for the next NICAR conference. I can’t wait to see what methods journalists do to produce amazing stories in a time when we all need investigative journalism.

David Rodriguez is an intern at The Investigative Reporting Workshop. Reach him at davidrodriguezreporting@gmail.com or on Twitter at @DaveeJonesLock.