Behind The Story: Analyzing and mapping salary data for small-town mayors 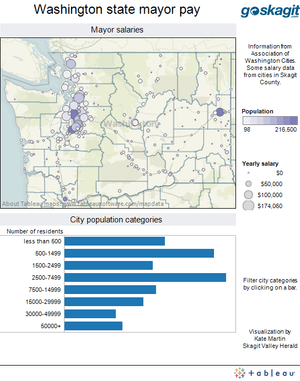 In August, reporter Kate Martin of the Skagit Valley Herald analyzed salary data for mayors across Washington state and ended up with a story about mayors from small towns in her coverage area -- Mount Vernon and Anacortes -- who had salaries on par with mayors from cities several times larger. In reporting the story, Martin first had to gather the data and then reconcile it with the realities of small-town civic duties.

The idea for the story arose through her typical reporting practices: each year, she requests salary data for all of the agencies that the Skagit Valley Herald covers.

“I start my records requests in February because it’s right after they close the books,” she said. “I do them for 25 different agencies. That includes the counties, the ports, and all of the dike districts in this area, the hospitals in this area.”

Response time took about a month for the longest one. Once the data is in, she tries to make time to put it all in one database, and then she does various sorts, including who makes the most money.

“I was very surprised to see the mayor of Anacortes made over $100,000,” she said. When she saw that, she decided she’d like to get salary data for all mayors in Washington, but requesting it from each city wasn’t practical. “I was wracking my brain and I remembered there was an agency -- the Association of Washington Cities -- that keeps data on all of these.”

She requested and received data from the association of cost comparisons and salary comparisons, but the spreadsheet “was pretty dirty,” she said. She had to split the columns to determine how they were paid, for instance if it was per month or per meeting.

The data showed her that Skagit County’s two full-time mayors each earn more than the mayors of Tacoma, Vancouver, Yakima and Olympia -- all much larger cities. The mayor of Anacortes, population 15,778 according to the 2010 census, makes more than the mayor of Spokane, a city of 208,916 by the same measure.

Martin mapped the mayor salaries using Tableau -- which she learned about at the 2012 NICAR Conference in St. Louis. But Tableau had only 10 percent of the location data for the small cities in Washington, so she gathered the rest from the state Geographic Information Systems page and joined it with the salary data in Microsoft Access.

The story was a quick turnaround, she said, given her schedule.

“Keep in mind, we’ve got five reporters and we’re a daily, so it’s something I work on when I have time,” she said. “It was right after I got back from the IRE conference -- by that time I’d already downloaded the GIS info in between other stories. It took a couple weeks after that.”

After she’d seen the data, she spoke to city officials to find out more about the disparity in salaries and the possible reasons behind them.

“I absolutely had to talk to them, and that was not a fun conversation. I mean, we grow up listening to our parents say that’s a rude topic,” Martin said. “There was a lot of crossing of arms, defensive postures, and they weren’t comfortable talking about it, but they knew it was public information.”

The interviews also revealed how the many small towns in her coverage area vary dramatically in how they define a mayor’s duties and compensation. Many are part-time and some have no salary and only benefits, and a few part-time mayors told Martin they worried that prevented them from helping their city’s development, she said. The mayor of Anacortes, meanwhile, who is the 12th-highest paid mayor in the state, works full time and is also in charge of the county’s largest water utility.

Getting the mayors to talk openly about their salaries and duties was a factor of Martin having worked in the area for five years, she said. “They all knew who I was. They tend to have strong personalities, and I don’t think they would have just talked to anyone as long as they did for me.”

You can reach Kate Martin at kmartin@skagitpublishing.com or on Twitter @Gov_SVH