Behind the Story: Firefighters disabling the city's budget 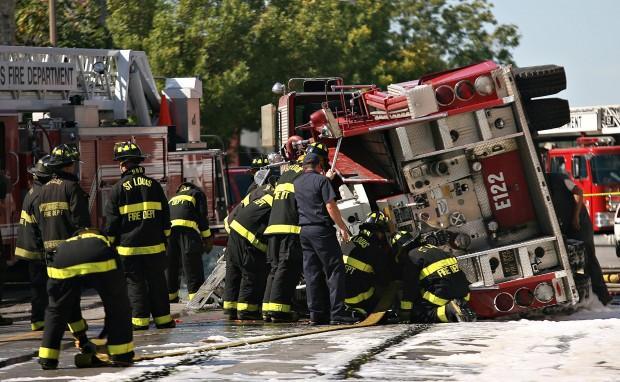 Social media can be an individual’s nightmare and a reporter’s goldmine. In “Disability pensions allow some firefighters to collect while working elsewhere,” St. Louis Post-Dispatch’s reporters used an array of investigative tools to publicize a mismanaged disability pension system that is eating away the city’s funds.

But even when firefighters are capable of moderately heavy workloads, doctors will recommend they retire. Pvt. Romondo Battle, a three-year firefighter, injured his back while fighting a fire in 2008. Two months after surgery, his doctor found Battle could shoulder "medium-heavy" to "heavy" physical work, but not the "very heavy" firefighters' load, and recommended that he retire. The pension board agreed, and Battle retired at age 33 with plans to seek work as an aerospace mechanic, according to records in his workers compensation case.

If he lives to 78, the pension system will pay Battle about $2 million.

Battle confirmed the details of his injury in a telephone interview that was cut short when the line went dead. He didn't answer return calls.

For starters they never underestimated the power of social media.

“I just used every free minute that I had when I wasn’t interviewing someone, just all the empty spaces in your day I basically filled with pushing and pushing on social media, just searching for anything these guys had said online,” Kohler said.

With a name in mind from the data he had collected, Kohler found one ex-firefighter who had posted YouTube videos of himself snowboarding. In a side story Kohler presented a photograph of the man snowboarding and laid out the details of the man’s disability pension. The retired firefighter was receiving an annual disability pension of $53,000 for a knee injury he received on the job, he wrote.

Kohler also interviewed Burke over the phone, and sure enough after the interview the YouTube video was taken down. Luckly Kohler had already saved the files.

Besides scouring the Web and Facebook, in particular, Kohler and Hunn went the extra mile to promote the story using social media. Kohler had tried multiple times to get a hold of the pension board’s longtime chairman. It was at a public meeting two days before the story was going to be published that he caught him. The chairman agreed to an interview on the spot, and while Kohler conducted the interview, Hunn videoed with an iPhone. The video was promptly uploaded to YouTube to promote their Sunday story.

This iPhone had come in handy more than once during their investigation.

Using a Missouri law, Public and Business Records under Missouri Revised Statutes, Kohler and Hunn were able to access records where they were kept. Kohler spent two hours at the pension board photographing four years worth of board minutes and later he and Hunn spent another few hours photographing 10 years worth of documents.

They also photographed 31 years worth of financial statements and audits from the pension board, which were over 1,000 pages. After that they uploaded the photos to their computer and converted them to PDFs using programs such as Nitro.

“They can’t really charge you if you show up and do it yourself,” Kohler said. “So even though it did take us a couple hours, I think it’s better to just go. And we were able to ask questions while we’re doing it.”

They weren’t charged for copies or for having a staff member make the copies but on one of their visits they were charged $50 for being supervised.

While the pension board cooperated with these requests, it rejected their request for disability retirement files.

“They told us because they contain medical records that those were not public files,” Kohler said. “So we were sort of in the dark for a little bit, but then we realized that if these guys were injured they would almost certainly file a workmen’s comp claim.”

A workers' compensation claim would be filed separately from retirement, he said. So they were able to go around the local government and request documents from the state’s labor department.

“We were dealing with the bigger bureaucracy,” Kohler said. “I don’t think they really cared what we were doing, they were just dealing with a regular records request.”

While they had to go to the state in this instance, they were able to get an Excel file on pension members that were working or had retired. This included member names, and for those that were retired date of birth, date of retirement and how much his or her monthly pension was. Using the average life expectancy of 78 years, he was able to calculate how much the city might spend on a firefighter’s retirement or on a firefighter's disability retirement.

Kohler also tapped into his previous knowledge of local firefighters to breathe life into the numbers. Mike Enright had been involved in a DWI case a year before he received disability retirement, Kohler said.

Kohler got the DWI case from the court of appeals archive office and details on the disability injury from the pension board’s minutes. Kohler combined these documents with building permits, which showed Enright and the pension board chairman had worked together on construction projects, and drew some interesting conclusions.  He found that Enright was a pack a day cigarette smoker with emphysema and that the chairman had made the motion for Enright to receive an annual pension of $44,332 for the disability — obstructive lung disorder.

So after roughly 10 months of reporting Kohler and Hunn had a jam-packed investigative article, an explanatory piece and multiple ex-firefighter profiles.

Shortly after the articles came out, both the mayor and the president of the Board of Alderman rewrote their competing pension reduction plans to include cracking down on disability pensions, Kohler said.

“I think actually we have a lot of good will toward us from the firefighters, which is a really good thing because a lot of those guys don’t like having half of their colleagues go out on disabilities any more than the public does,” Kohler said.