Behind the Story: High-stakes testing in Norwegian schools subject to corruption 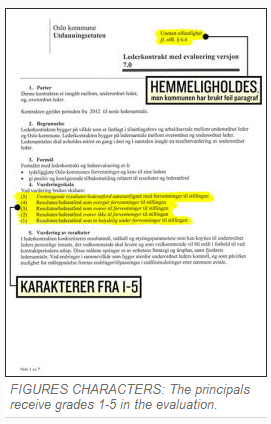 A series of investigative reports by Verdens Gang (VG) in 2013 exposed that principals at all primary and secondary schools in Oslo, Norway’s capital, were given personal incentives and salary benefits in secret working contracts and on the basis of student results on national tests.

The investigation found a significant correlation between the number of students exempt from tests and the average scores. An associate professor at the University of Oslo reviewed the data and found that the more students exempt, the better a school’s score. Minority students and children with other special needs are eligible to be exempt after an individual evaluation.

For several years there has been a fierce national debate over the use of the results generated from national tests mandatory for primary and secondary schools in Norway. The results have been used to rank good and bad schools, especially in the multiethnic capital of Norway. There has been a significant amount of pressure on principals and teachers to produce good results. There have been a number of articles in Norway on the possibility of teachers and principals tampering with exemption rules in order to influence scores. Prior to the VG investigation, no one had been able to show a correlation and a clear motive to tamper with scores.

The VG exposé documented both a correlation and a motivation to cheat.

The investigation started with an observation – two identical schools, both with about 95 percent minority students, had different percentages of exempt students and different average scores. The school with 22 percent of its students exempt from the test had a significantly better average than the school that only excluded 7 percent of its students.

A correlation analysis was conducted between “rate of exemption” and “average score.” It showed a significant connection. The more students exempt, the better the average score. This information led to our first articles. In this initial series we also introduced a secret report sent to the education department. The document included worries about exemption practices on national tests and mentioned the possibility of cheating and manipulation. Several sources came forward and talked about how much time and effort was spent seeking loopholes to meet the score demands from the Oslo education department. The first articles lead to a national debate in several newspapers and on TV.

In the wake of the exposé a question arose: why would teachers and principals cheat? Is there a personal gain?

Another lengthy investigation disclosed that Oslo principals have secret employment contracts with previously unknown evaluation criteria. In Norway all executives in the public sector are normally required to disclose their employment contracts. The pay and benefits for every CEO in Norway is public information.

Norway has liberal transparency rules, but during our investigation the Oslo council was not willing to disclose the contracts. They wouldn’t even release a blank form. Then several national politicians demanded to see the contracts. After a six-month-long tug of war, county commissioners ruled in favor of VG. The newspaper got contracts for all 105 Oslo principals (censored for name and information of personal nature).

Several analyses were done. Among the findings: each principal’s contract was reviewed each year and leaders got marks (86 in all) mostly on how well his or her students performed on tests. The Oslo education minister confirmed that results depicted through the 86 parameters had a direct impact on yearly salary and benefits negotiations.

A number of calculations and a new correlation analysis, done on the many parameters disclosed, showed that the main score of each principal was the same as the average score on student test results. Bad student scores resulted in a bad score for the principal. A bad or good score had a direct effect on the principal’s position when going into yearly salary negotiations.

Shazia Sarwar is a reporter and commentator at the news section in Verdens Gang (VG) in Oslo, Norway. She has done investigative reporting in education, child abuse, assault rapes and violence against women. Sarwar specializes in data-driven journalism, business-journalism, cancer and minority communities.