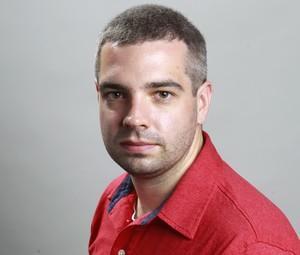 Chris Baxter and NJ Advance Media wrestled out a compelling and untold story, let the digital presentation take the lead and came away with a “smashing” investigative success.

Using a system he developed to keep tabs on lawsuits involving state police, Baxter came upon the stifled story of Kenwin Garcia, a Newark man who died in 2008 after an altercation with police along the side of the highway.

Baxter embarked on a deep reporting project that resulted in 7,000 words, an 8-page special print section in The Star-Ledger and a digital presentation as rich as any Baxter remembers NJ.com undertaking.

He uncovered a series of inconsistencies in the stories of police officers on the scene and talked to experts of various backgrounds who questioned police tactics and the eventual determination that 25-year-old Garcia died of “excited delirium.”

First came the legwork. Garcia’s death was at the time glazed over by police with a vague, two-paragraph press release. Five years later, the public was still lacking information about the internal investigation into the matter.

“My mindset the whole time – and eventually I brought everyone on board – was, I want to tell this online in a longform format with multimedia,” Baxter said. “I want it to be interactive. I want people to see the scene, hear the scene. I want them to hear from the experts.”

Baxter reached out to the family, which sued in 2010, after he saw they won a 2013 settlement from the state for $700,000. But he found that a confidentiality clause made the family reluctant to talk. Baxter argued against the clause, which the state said had been included to protect relatives, and learned that family members were free to talk to the media as they pleased. Baxter knew he had one side of the story. 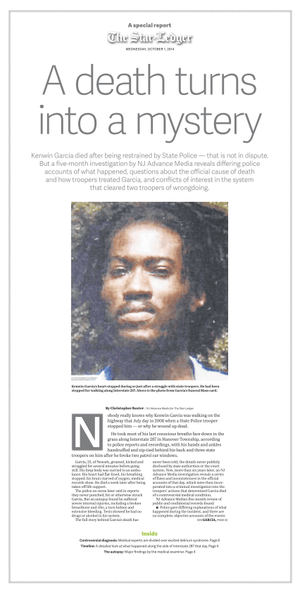 To build the rest, he sent a barrage of open records requests – eighteen by the time he’d finished his investigation. Officials denied some of the records requests. In a few of these cases, however, Baxter was able to successfully argue for freeing the files. He obtained the toxicology report, brain screenings, ambulance records, and medical records. But he also used the act to gather pieces that would drive the digital presentation, among them the dashboard recordings from state and local police on scene that day and a request for arrest-related deaths dating back 10 years.

“Some of the sentences in that story took a month,” he said.

Baxter wrestled with the state, in particular, over a request for copies of bills showing the state’s payment for two experts, who ultimately helped them build a case for an “excited delirium” cause of death, which some critics say absolves police of wrongdoing. The state claimed it didn’t have a record responsive to a request for one of the bills, and withheld the other because it was a part of a criminal case file. After Baxter’s prodding, they reversed course.

“They gave us the one bill they’d denied, and lo and behold they found the other bill and provided us that one as well,” he said.

But the biggest break came when Baxter – benefiting from connections built over about three years working New Jersey police sources – got his hands on files that weren’t subject to open records law. A source leaked him 100 pages of confidential state police investigative files. The files contained summaries of interviews with troopers and Garcia’s family, summaries of the scene and the incident, and a day-by-day summary of the state’s investigation into what happened.

“That really presented us with a good picture of what state authorities determined or said had happened,” Baxter said.

With the reporting taking shape, the NJ.com team honed the digital presentation. The 10 years of arrest-related death records were compiled into a database. The team put together an interactive timeline and added story video and audio from the scene to bolster Baxter’s descriptions.

Baxter also flew to San Antonio and Indianapolis for original, on-camera interviews with expert sources – a commitment of resources that shows how serious NJ Advance Media was about the digital presentation, he said.

All things considered, the success of the story justified the expenses, Baxter said.

“From my perspective, this was really a smashing success for us,” Baxter said. “The traffic that it drew online was phenomenal. It proved to ourselves and to others here in the state that this is a successful way to do big, enterprise, investigative journalism.”

The story resonated with readers, many of whom were following the protests in Ferguson, Missouri, after the shooting death of teeanger Michael Brown. But Baxter points out that his reporting began well before Ferguson gripped the country. His story published not quite two months after Brown’s death.

Baxter maintains, too, that the story of Kenwin Garcia stands strong by itself.

“This was a man who during his life was mostly invisible to most of New Jersey and, after his death, was going to be easily forgotten,” Baxter said. “It was difficult at many turns. It was difficult fighting for information. But that’s what really drove me through all of this because if it weren’t for our work, this was truly a story that would never have been told.”

Shawn Shinneman is a graduate student at the Missouri School of Journalism and a student employee at IRE. Prior to graduate school, he spent two and a half years reporting daily news at a newspaper in the Chicago suburbs.  You can follow him on Twitter here or email him at shawns@ire.org.