Beyond words: Storytelling at the intersection of cool & creative 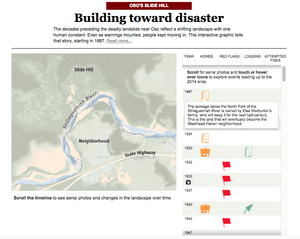 The Seattle Times built an interactive graphic on the Oso landslide

"For me, doing this panel is a real treat because it means, for once, I get to hang out with the cool kids,” Ken Armstrong, staff writer at The Marshall Project, said as he kicked off an IRE Conference session on unconventional storytelling methods for investigations.

Those “cool kids” consisted of Amy Julia Harris, an investigative journalist at The Center for Investigative Reporting; Tori Marlan, an independent journalist; and Gabriel Dance, managing editor of The Marshall Project.

Before moving to The Marshall Project, Armstrong worked at The Seattle Times, where he was part of a team covering the devastating Oso landslide. As part of the project, readers could scroll or swipe through an interactive graphic on their mobile phones to see the shifting landscape of the area leading up to the disaster.

Julia Harris’ experience covering the dilapidated public housing system in Richmond, California, had her working with three poets to create a spoken word piece on the conditions and struggles of the citizens living there. She discovered “different ways of making people care” about this issue while also making sure to work closely with the poets so that facts were never compromised.

Marlan, however, struggled with having not enough facts during her investigation into an Ethiopian orphan’s trek to America. This prompted her to consider other options of telling the story, which led to the creation of an e-comic with help of artist Josh Neufeld. Rather than bogging down the visual story with too many details, Marlan focused on maintaining journalistic accuracy with things like researching the TV shows that were on at the time in South Africa. Animated panels and ambient sound in the comic made the story much more personal, Marlan said.

For Gabriel Dance, innovative and interactive storytelling was something he picked up during his time at The Guardian, where he co-authored a lengthy story that explained Edward Snowden’s NSA leaks. For that project, Dance said transparency was important. They knew it would be difficult for readers to fully understand the technical terms, so they employed tools like GIFs to illustrate the complicated process of anonymity tool Tor and had interviewees speak directly to the camera/audience. This increased engagement and understanding from the readers.

By understanding the benefits of digital tools and collaboration, Dance said that journalists could achieve more by “leveraging the powers of the Internet and powers of digital storytelling.”

Albert Hong is currently a junior at Temple University studying journalism and minoring in digital media technologies and is serving as the Lifestyle editor for his student-run newspaper The Temple News. With a special interest in technology, he's also passionate about what goes on in the video game industry.