Catch up with some of IRE’s international members

While many of our members work in the United States, hundreds of international journalists contribute to the IRE community. IRE membership stretches from Australia to Argentina. It includes journalists in more than 50 countries, including Pakistan, Kenya, India, Finland and Switzerland. We asked a few of our international members to tell us what they’ve been working on. 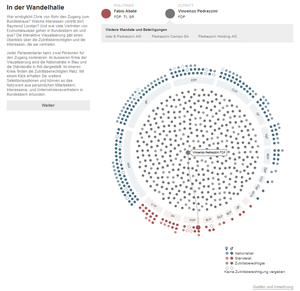 About 400 people have a badge that allows them to access the Swiss Federal Assembly in Berne. The Swiss daily Neue Zürcher Zeitung, a German-language paper, analyzed commercial registry data to shed light on who has access.

The Swiss Federal Assembly in 2011 published on its website lists of individuals with access to the Federal Palace. These lists are updated monthly. In addition to name, party, and canton, every parliamentarian is registered with a maximum of two people he or she nominated for access. More than 400 people were registered by 244 parliamentarians as of Feb. 6.

Accredited stakeholders are listed by name and function. They may state their current employer or identify themselves as a guest or personal assistant. The site does not include information on relationships with other organizations or companies.

The NZZ Data Team checked the names of those with access against entries in the commercial register and manually sorted the results into 21 different categories according to sector. 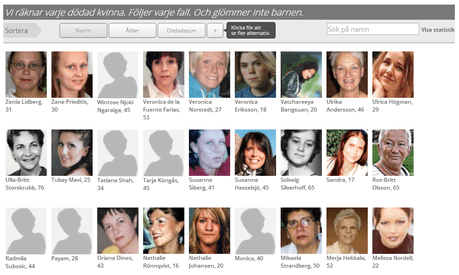 Kerstin Weigl, an investigative reporter at the Swedish newspaper Aftonbladet, and her colleague Kristina Edblom have spent the last five years investigating violence against women in Sweden.

Weigl and Edblom sought to collect data on all cases of fatal violence against woman reported to Swedish police since 2000. They’ve identified cases in which women were killed by their husbands, boyfriends or ex-husbands. All of their material - including articles, films and graphics - is kept on their blog.

Last year they decided to construct a searchable database so that information could be shared with the public. The data allowed Weigl and Edblom to give readers the big picture, with numbers on how, where and why each woman was killed. In most cases, the women tried to seek help and were ignored by the authorities.

Weigl and Edblom recently expanded their investigation to include information about the children of the murdered women. In many cases, they found, fathers still had formal custody of their children from jail.

IRE member Delphine Reuter is managing a new investigative reporting program beginning this month at the Institut des Hautes Études des Communications Sociales, a journalism school based in Brussels. The program, which will be taught in French, is open to all journalists wanting to learn more about the techniques of investigative reporting. The program is the first of its kind in French-speaking Belgium.

Participants will learn to document, plan and organize investigations with IRE member Mark Lee Hunter, a professor at the Institut Européen d'Administration des Affaires (INSEAD) and author of "Story-based inquiry: a manual for investigative journalists." The program will cover topics including online security and encryption, funding and transnational collaborations.

Participants who complete the program will have an investigative reporting project ready for publication or broadcast.

International members: We’d like to hear from you. Tell us about your work, awards and projects. Send us an email at web@ire.org.