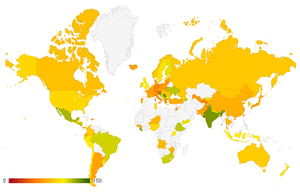 The Center for Law and Democracy rates FOI law effectiveness by country.

Freedom of Information Act advocates have consistently claimed that institutionalizing the right to information will benefit countries, particularly in addressing corruption.

They are not lying.

An intriguing link, however, is between ratings of FOI law effectiveness and the perceived level of corruption in a country.

The Center for Law and Democracy rates the implementation of right to information laws across countries based on seven categories: right of access, scope, requesting procedures, exceptions and refusals, appeals, sanctions and protections, and promotional measures. I compared their ratings with corruption ratings from Transparency International.

I did not expect what I found: Countries with effective implementation of right to information laws, according to the ratings, were also perceived as corrupt.

This relationship initially baffled me, considering the positive relationship between how long a country has had an FOI law and being corruption-free.

However, this intriguing link started to make sense as I reflected about how right to information is supposed to function in a democratic society.

By guaranteeing the right to information to citizens, governments ensure transparency and allow themselves to be accountable to the people whom they serve.

A fully functioning democracy rests on the ability of citizens to regularly check on their representatives in government.

However, for the longest time, many politicians have considered FOI laws as window dressing—a last-resort for a worsening corruption problem, if not a half-hearted response to clamors for transparency.

Many citizens might also look at FOI laws the same way: a mechanism only invoked to solve a problem already at its worst.

This explains why countries with good FOI law ratings were also perceived to be corrupt: The law is being used to try to solve the problem, and therefore there are opportunities to observe the law at work.

It is possible that in countries with older FOI laws, corruption is no longer a terrible problem, and therefore the instances to observe the law at work are few.

These findings lead me to how we are supposed to appreciate the value of FOI laws.

Freedom of information should be considered as a mechanism to prevent corruption.

When citizens can freely access information from the government they deputized, they can regularly check on officials to make sure things are in order.

But again, the question of implementation also rests on the hands of citizens—are they exercising their right to information to regularly check on the government, or are they reserving it as a last resort?

This is where journalists come in. While we cannot expect citizens to constantly monitor the government, busy as they are with their daily lives, journalists serve the watchdog role on behalf of the general public.

Journalists have—and should have—the capabilities, knowhow, awareness, and resources to exercise their rights to information not only to uncover corruption, a staple in investigative journalism, but also to make sure that the government is working the way it is supposed to.

But on top of that, I think journalists should also remind the public they serve everyone’s right to information.

In this evolving ecosystem called journalism, where the people we used to call the audience are now contributing directly to information gathering and dissemination, the roles of journalists should also evolve from merely supplying information to being a conduit for the exchange of important information.

This way, we just not inform the citizens we serve. We also engage and empower them.

Edson C. Tandoc Jr. is a doctoral student at the University of Missouri School of Journalism. This article is based on a longer study conducted under the supervision of Dr. Charles Davis, now the dean of University of Georgia's Grady College of Journalism and Mass Communication. A version of the study will be presented at the Association for Education in Journalism and Mass Communication (AEJMC) Conference in Washington DC on August 10. The study also won first place in the Moeller Student Paper Competition of the association’s Mass Communication and Society Division.