Discovering data at the IRE Conference 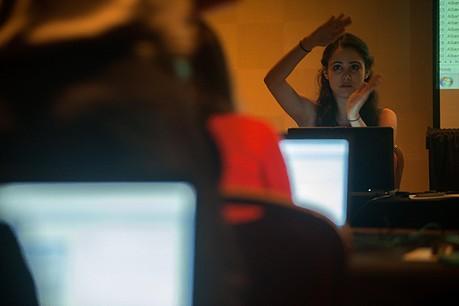 Jewel Loree, of Tableau Software, uses her hands to illustrate how the software reformats data into columns during the Tabluea Public for beginners session. Photo by Travis Hartman.

It’s a word mentioned over and over at the IRE Conference, whether you’re at a specific panel on the subject or not: data.

This is my first time attending an IRE conference and I already knew that data can add real power to a story, which is why I made sure to attend the Tableau software hands-on training for better ideas and skills on what to with a dataset once I have it.  But I did not realize how much just the process of collecting data can spark and guide a story.

At a session about investigating charities, Kris Hundley from the Tampa Bay Times discussed the project she and co-presenter Kendall Taggart from The Center for Investigative Reporting recently published on the 50 worst charities in America. Hundley said as they worked on the story, they created a spreadsheet to organize the names of the charities and people associated with the charities, which lead to the realization of the Reynolds family network of charities. She said laying out that data led to an angle in the story they did not originally plan to cover.

I struggle with what to do with the information once I have it without really realizing the importance of the discovery process. I follow leads as I get them and collect the information as I can, but after two days at IRE, I’m going to make sure I focus on the data and what I can find. Along the way maybe I’ve missed the moonwalking bear that Jacob Fenton from the Sunlight Foundation warned us about when doing data analysis.

I also learned more about how to visualize data, both for presentation and analysis, in hands-on training with Tableau.

If you want a skill to market to media organizations as a freelance writer or want to add depth to your articles, Tableau is what you need. The software allows journalists to turn tabular data into visualizations like maps and charts -- without programming skills.

Tableau has a free public version of its software, in which everything you do is online and public. But Tableau Software is also making its professional desktop version, which typically costs $1,999, free to IRE members.

Once you take some time to familiarize yourself with the basic functionalities, Tableau is a rather intuitive tool for making simple data visualizations with the ability to add interactivity.

If you have used Excel, the software will look familiar. Separate tabulated sheets are created to import data and then make different maps, charts, and graphs. Once the program recognizes the data, a tool bar then shows you the options available for a visualization given the data. For example, location data prompts the software to highlight "map" as a visualization option. The sheets can then be combined on a dashboard, which acts as a template for combining the visualizations and laying them out how you want them to look on a web page. The dashboard will also allow you to make the visualizations interactive, so that when a reader clicks on a location in a map, for example, corresponding data in a bar chart will appear below it. The Wall Street Journal used Tableau to create visualizations to accompany its story on the 100 fast-growing software companies. An article in the The Seattle Times on slow loan modifications that won the 2011 Gannett Award for Innovation in Watchdog Journalism included a graphic made with Tableau and The Atlantic Cities used it to make a map visualization of election results to show how where you live affects how you vote.

Tableau offers training on its public software the first Friday of every month on its website as well as YouTube tutorials. It is only PC-compatible at the moment. Tableau is working on a Mac version of the software.

Kathryn Sharkey is a journalist in Austin, Texas and a recent graduate of Southern Methodist University.