Do universities play a role in student suicides? 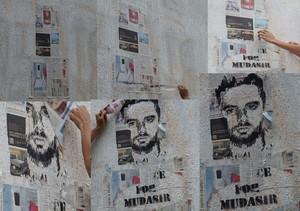 By Nikhila Henry, The Times of India

Can the dead talk? In rare cases they do.

A day before, the scholar was summoned to a nearby police station and questioned on counts of “harassing” a fellow male student, Vasim Salim. Some administrative staff of the university worked with the police in this round of questioning.

While this at first seemed to be what some consider a “routine” case of suicide, Kamran’s death had more to it. Reporting his death and the role university officials and police played in it led me to a series of stories on student suicides happening across the city, for reasons other than individual woes.

My question was: Do educational institutions drive students to kill themselves?

What made Kamran’s story out of the ordinary were two aspects of it which I chose not to ignore. First, he, a Muslim student from Kashmir was summoned by the police a fortnight after twin bomb blasts rocked the city, killing and injuring many, a time when Muslim youth were being picked up randomly for questioning.

Second, the administration and the police issued several off-the-record statements to the press about Kamran’s character, branding him a gay troublemaker even though he had not come out of the closet when alive, leading to suspicion that both parties had something to hide. And they did.

Kamran’s version of events came to me as I paid attention to every detail of the developing agitation lead by scores of students on the varsity campus, building trust among many who were fighting what seemed to be a losing battle.

One evening, a phone call from a trusted source hinted at Kamran’s correspondence with the administration soon before his death. I used letters Kamran wrote in response to the harassment allegations to report on negligence of the varsity heads. As both the administration and the police had chosen not to talk about the existence of these letters, the story I wrote revealed a version of the deceased student who badly wanted someone to hear his side of the conflict. A close look at each of the letters revealed that Kamran had defended his case politely, yet with conviction.

This story changed the direction of reporting related to the suicide. Kamran’s death was no more just a “case.” It became the story of a real person, one who was not offered help when he needed it.

Mudassir Kamran’s story did not end there, as the police chose to hunt down students who were protesting for him. In what seemed to be a clear case of profiling, internal police records I procured revealed efforts of the city police and the administration to close Kamran’s case by blaming students and some faculty members for the unrest, trivializing the very cause of his death.

What made the series a success was its spiraling effect. It gave me the chance to write on what can be broadly called institutional lapses that lead to student suicides. On university campuses in a city where a heterogeneous population of students come from various socioeconomic backgrounds (including those from various races, castes and communities), no mechanism was in place to address their individual problems or help them cope with the system. Moreover, no effort was made to change or revive the existing academic system to suit the needs of these students.

This report was admitted in the Andhra Pradesh High Court as a Public Interest Litigation (PIL) and the court ordered a probe into all suicide cases, including that of Kamran. The court went on to take steps to ensure that a meaningful process be put in place to prevent student suicide.

As things stand now, the struggle committee set up by students demanding a probe into the death of Mudassir Kamran is still functional, more than a year after his death. No ex-gratia – a form of compensation payment – was made to the student’s family.

I am continuing to report on student suicides caused by administrative lapses, harassment and discrimination based on race, class and caste. The most recent investigative story on an institutional suicide was that of Madari Venkatesh, a Dalit (lower caste) student at the University of Hyderabad, another centrally-funded varsity, who killed himself following alleged caste harassment by teachers.

Nikhila Henry is a principal correspondent with the Times of India in Hyderabad, where she covers education. Henry specializes in conflict reporting, covering communal clashes and sectarian violence. She has reported extensively on issues of harassment and related conflicts within modern educational spaces.