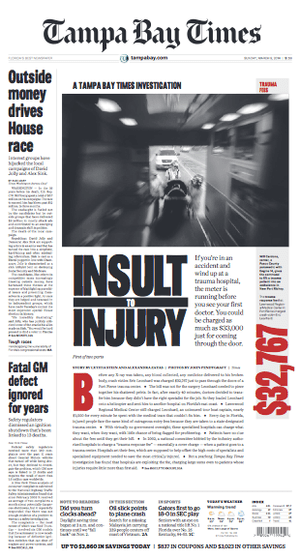 Trauma patients, who have no choice in where the ambulance takes them, are being charged as much as $33,000 the moment they enter a Florida trauma center. That money doesn’t account for X-rays or treatment; it’s just a cover charge, and thousands of patients have been billed more for it than for their actual medical care. The Tampa Bay Times, in an unprecedented data analysis, found that this fee, pushed a decade ago by industry lobbyists, has spiraled out of control. Taking it to unprecedented heights: One of the nation’s largest for-profit hospital chains, Hospital Corporation of America.

The ‘Boys’ in the Bunkhouse | The New York Times

For more than 30 years a handful of men with intellectual disabilities lived in a dot of a place called Atalissa, Iowa. Every morning before dawn, they were sent to eviscerate turkeys at a processing plant, in return for food, lodging, the occasional diversion and $65 a month. For more than 30 years.

Their supervisors never received specialized training; never tapped into Iowa ’s social service system; never gave the men the choices in life granted by decades of advancement in disability civil rights. Increasingly neglected and abused, the men remained in heartland servitude for most of their adult lives.

A review of data from the nation's 306 healthcare markets, as well as interviews with scores of experts and visits to communities from Maine to Hawaii, points to many common features of America's healthiest places.

There are 534 properties in New England alone that are considered Severe Repetitive Loss properties, according to the Federal Emergency Management Agency, which manages the insurance program. Often, these National Flood Insurance Program-insured properties have had four significant flood claims – two within one decade. Nationwide there are about 12,000.

Scituate has 112 of them. Over the years, such properties have accounted for 689 losses. The total in claims: $21.3 million, according to FEMA.

All of this occurs without any inquiry into whether the homeowners are wealthy, poor, or in between: FEMA’s flood insurance was designed to help all flood-prone properties regardless of economic status.

The long hours of the law | The Virginian-Pilot

In police and fire departments across South Hampton Roads, a small number of employees work substantial amounts of overtime, while others receive little or no OT pay - at a time when there have been few raises.

Twenty public safety employees in South Hampton Roads each worked more than 1,000 hours of overtime in the 2013 fiscal year. At minimum, that equates to almost 60-hour weeks.

Who has made millions off Chris Christie and New Jersey? | Asbury Park Press

The governor has allowed political cronyism to continue and even flourish, rather than stamp it out, with some of his closest confidants enriching themselves through millions of dollars in state contracts, and legal and lobbying fees, an Asbury Park Press review of thousands of pages of campaign, lobbying and contracting documents found.

A November state Department of Labor investigation cited 11 safety violations, of which eight were designated as serious, in connection to the fire on Jan. 21, 2013, when volunteer firefighter Matthew Porcari fell into the basement after the one-story home’s floor collapsed. The Press & Sun-Bulletin obtained the report last week through a Freedom of Information Law request. 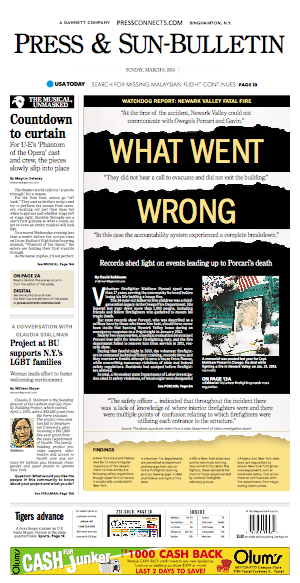 Experts said it is too easy for nursing homes to game or even defraud the federal and state system -- which is based on self-reporting and an annual inspection -- and appear as though they provide adequate care.

What's more, New York is not as aggressive as some other states in finding problems or penalizing subpar nursing homes, the data indicate.

Since 2002 in Brown County, police have been involved in 11 shootings, seven of which were fatal, according to Press-Gazette Media analysis of records involving the largest departments in the state’s fourth most-populous county. That’s about one every 14 months.

A confidential corrections department report, obtained by The Sacramento Bee, summarizes the findings of a suicide review team assigned to investigate inmate David Scott Gillian’s death. All suicides in California state prisons are reviewed by a team of corrections officials. The report obtained by The Bee, based on the review team’s interviews with prison staff and inmates, chronicles events leading up to and following Gillian’s hanging.

California counties are confounding the state’s court-ordered efforts to sharply reduce its inmate population by sending state prisons far more convicts than anticipated, including a record number of people with second felony convictions.

Delaware Chief Medical Examiner Richard T. Callery, who was suspended with pay on Feb. 25, is the subject of a criminal investigation into whether he misused state resources to run a private business, The News Journal has learned.

Since taking office in 2009, State Attorney Angela Corey has had the chance to speak to a lot of people trying to get their loved ones’ killers sentenced to death. She has put more people on Death Row than any other prosecutor in Florida.

Corey’s office has sent 21 people to Death Row, and 18 of them are still there with the other three getting off Death Row on appeal. No other current prosecutor in the state has put more than seven people on Death Row since the start of 2009.

The number of Louisville companies storing dangerous quantities of toxic chemicals has dropped significantly in the past decade, but hundreds of thousands of area residents remain at risk of being sickened or killed in the event of a catastrophic leak.

The Nevada Taxicab Authority, the state agency that regulates the taxicab industry, has a lax record of enforcing the law, with its citations to drivers dropping significantly in 2013, an investigation by the Las Vegas Review-Journal found.

The authority, a law enforcement agency with 26 officers, issued just two tickets in December 2013 to cabbies for long-hauling passengers, or taking them on longer than needed routes. In 2013, a state audit determined that nearly a fourth of trips from the Las Vegas airport to hotels on the Strip are long-hauls, costing passengers about $15 million annually.

Did we miss something? Send us a link at extraextra@ire.org.