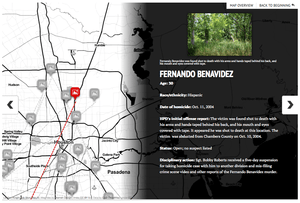 Eight Houston Police Department detectives have been disciplined for failing to properly investigate more than two-dozen homicide cases spanning almost a decade. The victims were as young as 11 months old. They were nearly all black or Hispanic. They were walking along the sidewalk or just answering their door when they were killed.

When news of the shocking oversight became public in April, Police Chief Charles McClelland apologized but said the problem had been fixed. That was of little comfort to the families of the victims, who were nowhere mentioned by name. The identity of each and the sketchy details surrounding their deaths are laid out in cursory offense reports recently obtained by the Houston Chronicle.