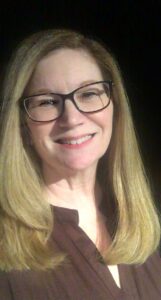 Patti DiVincenzo was an investigative producer and data specialist at WSB-TV in Atlanta for 16 years. Now, she’s bringing her experience to IRE as a trainer. We talked with Patti about her broadcast career and her time as an IRE member.

This interview has been edited for length and clarity.

How did you get started in journalism?

My brother went to the University of Missouri, and he decided that he wanted to major in newspaper. And I tried a bunch of stuff at KU; I didn’t know what I wanted to do. So I thought, well, I’ll take a journalism class and see what I think, and I loved it. And then I took a television class and just fell in love with the whole idea of wrapping a story around the video. There was something about dealing with the video — not the on-camera stuff, but just the whole idea of writing things a different way.

What was it like being an investigative reporter in Atlanta, a city that’s not exactly known for being the most cooperative with journalists?

It’s difficult to work with people who don’t want to help. I think the thing they do all the time is they just hope you forget. And when you don’t, they fight back on everything, and call your bosses, and your boss’ boss’ boss, and that type of thing, so it’s a challenge.

In Atlanta, we’ve been dealing with an ongoing city hall corruption case. In the beginning, most of the media outlets had filed a lot of open records requests. One day, then-Mayor Kasim Reed and city officials held a news conference — they had a big wall of papers and said, “This is all here, have at it” —  and it was the biggest joke. They were trying to look like they were transparent, and they were anything but transparent. Some of the pages had spreadsheets on them that were like 1 inch by 1 inch, maybe smaller. You couldn’t read it. It was funny because we actually all started working together — the newspapers and TV stations — and so when one of us went through a box, we would mark “nothing here” or put a mark on it and the name of the person who looked at it. We all had to work together to figure out how to get through it because there were just so many documents.

What’s been the most memorable story you’ve worked on?

For one year, I worked with a team of reporters from the Atlanta Journal-Constitution and WSB to identify all the police shootings in Georgia. We found some amazing stories. I mean, I can’t tell you the number of times I sat at my desk, and you would just hear someone say, “Oh my gosh,” as they were reading some document. It was a very sad and emotional story, but it was amazing that no one had really looked at it as a whole. I’d never worked on a project that took that much time before.

It was probably the most important story because we changed a law. In Georgia, when there was a grand jury for a shooting, the police officer was allowed to sit in the grand jury room the entire time. Then, he or she was allowed to give a closing talk to the jury — but the officer didn’t have to go under oath or testify, he just got to get up and explain what happened. It was crazy. Now the law prohibits officers from sitting in the grand jury room the entire time, and if they talk to the jurors, prosecutors can cross-examine them.

What do you think are some of the biggest challenges for broadcast newsrooms wanting to do investigative reporting?

I think the biggest challenge is probably the same thing as it is at newspapers: feeding the beast. It's so much more than it was before, because now you have to tweet so many times a day and you have different versions of a story. You have to think about, how is it going to look for broadcast and the web? There's just a lot to do in a little bit of time.

You’ve been part of the IRE community for a long time. Are there any moments that jump out to you from your time as a member?

The first time I remember getting to go to a conference was in Philadelphia in the ‘80s. It was so amazing to go to a conference and feel like, these people understand me. You can never stop learning. And if someone’s like, “Well, you’ve been to all these, why do you go?” it’s because I’m always learning something. And beyond that, it gets you so excited, because it’s so much fun to be around people who like to do the same thing you do. It gets you all refreshed and ready to go back and tackle the world.

I went to a panel on machine learning once, and I must’ve, like, leaned on my phone or something. There was a quiet moment, and my phone said, “I’m sorry. I didn’t understand.” And I thought, well, that’s appropriate. Everyone started laughing, and I thought, “Well, I don’t understand either, but OK.”

Why did you decide to make the jump from producing and reporting to IRE trainer?

When I went to college, a teacher told me, “I think you're really smart. I think you can do whatever you want to do.” And that was the first time I thought, maybe I can. She was a speech teacher, and it just changed everything for me. I started really trying and soaking up everything I could learn, and I would love to be able to pass that on and inspire someone else.
Where I worked, I helped a lot of people with different things. It's really my favorite part, to watch someone sort of understand what you can do when you know what's out there and how to ask for it. A light goes off, and it's very gratifying.

What are you most looking forward to when it comes to joining the full-time staff?

I think it’ll be really fun to be around people who like watchdog reporting. I think my favorite part is going to be planning and setting up workshops, because I love learning. I just love it when you’ve got people who want to know more, and you can always learn something from them, too.