Satellites and secret cameras: How the Associated Press freed 2,000 slaves 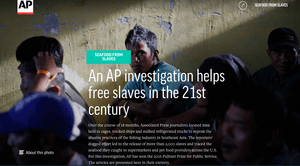 It’s an island few outside of Indonesia had ever heard of. Accessible only half the year because of violent monsoons, Benjina is located in the southernmost portion of Indonesia.

The island held a shocking secret: it was where slaves languished -- sometimes in cages -- before they were forced onto boats and pressed into service on Indonesian fishing vessels. And the fish that they caught -- so valuable that they were barred from eating it -- was making its way to supermarkets and restaurants in the U.S.

“Your seafood may come from slaves,” the report revealed.

But to tell this story -- to trace the path of seafood from the hands of slaves to family tables and cat food bowls across the U.S. -- the Associated Press would have to go above and beyond, employing techniques that seemed straight out of a spy movie. The team of reporters won a Pulitzer Prize for Public Service and an IRE Medal for their work, which revealed not only the widespread use of slaves, but their link to the U.S.

[Read the series: Seafood from Slaves]

The AP’s international enterprise editor Mary Rajkumar detailed the extraordinary lengths that the team of reporters went to. Their investigation, which shed light on an institution that many assumed was a shameful relic of centuries past, also radically changed the lives of the men bonded into labor.

It started with a tip, Rajkumar said. Then, after some probing, reporters found that the existence of slave labor in the fishing industry in the region was an “open secret.”

In Benjina, they laid eyes on the men, some in cages for attempting to escape too many times. And others who never made it, buried in graves in the forest under the fake names they had been given to cover up for the fact that they were working illegally.

The men, from poverty-stricken Burma, were lured by the promise of high wages, Rajkumar explained, and then trapped on boats and the remote islands.

“They’re told that they’re going to have a great job .. and then essentially trapped on these boats,” Rajmukar said.

To get footage of the men on Benjina, reporters, fearful for their safety and the safety of the men who became their subjects, passed a camera to a migrant worker on the island.

“If you see the video, he’s shaking because he’s so nervous,” Rajkumar said.

But the men were desperate to get home, and despite the danger, wanted to talk to reporters. To get to them, reporters pulled boats alongside fishing vessels and conducted interviews shouting back and forth.

Proving slavery existed was just the first step. Linking the seafood caught by slaves to the U.S. market was even more challenging.

It began with tracking shipments of seafood from Benjina using a tool called Marine Tracker. They traced it to the port of Samut Sakhon, located near Bangkok in Thailand. There, Rajkumar said, reporters observed the seafood being off-loaded onto trucks. Reporters then trailed the trucks over four nights to factories around the city. From there, they traced the shipments from the companies in the U.S. through U.S. Customs records.

The Associated Press discovered the seafood shipments were making their way to the U.S. The seafood ended up in U.S. supermarkets and restaurants, where Americans, blind to its origins, were serving it up on dinner tables and at restaurants.

Some of the seafood went into making cat food. It brought into stark relief the gross inhumanity of the supply chain: cats in the U.S. were consuming fish that was deemed too valuable to be consumed by the men who caught it.

“This was heartbreaking,” Rajkumar said. “The men had no idea where the fish was going. All they knew was it was too valuable for them to eat it. Can you imagine giving your life up for cat food?”

The impact of the reporting was immediate, resulting in the liberation of the men at Benjina. But dozens of boats loaded with slaves scattered across Southeast Asia before their men could be rescued. So the Associated Press set out to find them, a needle in a vast, watery haystack. So AP reporters convinced a company, DigitalGlobe, to point their cameras towards the region, capturing images of the boats known to be carrying slaves.

"You can't hide from space,” the CEO of the company told Associated Press.

But Rajkumar said there is still far more to be done. The fishing industry was far from unique in its use of slavery and forced labor -- and it likely still persists.

Moriah Balingit covers education for The Washington Post. She graduated from American University in 2015 with a master's degree in journalism and public affairs with an emphasis on investigative reporting. She previously was the city hall reporter for the Pittsburgh Post-Gazette.