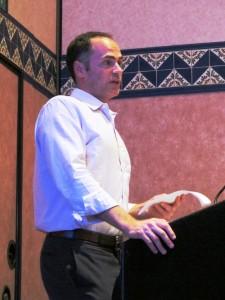 Full immersion in local immigrant communities produces the most compelling stories, according to Kirk Semple, an immigration reporter for The New York Times. “It helps to be curious. It helps to be voracious,” Semple told participants at an IRE Better Watchdog Workshop this week in Orlando.

The full-day workshop was held in conjunction with the National Association of Hispanic Journalists’ annual convention. Other speakers included Manny Garcia, executive editor of El Nuevo Herald in Miami, who recently was elected as the first Latino president of the IRE board of directors. Also speaking was Mc Nelly Torres, an IRE board member and associate director and reporter at the Florida Center for Investigative Reporting. Semple offered several types of immigration stories that reporters in any city can tackle:

Semple shared the frustration of many journalists in the audience in dealing with officials from the U.S. Immigration and Customs Enforcement agency and getting reliable, specific information. “They really frustrate me, and they know exactly what they’re doing,” Semple said. ICE routinely reassigns its public information officers, he said, making it tough to develop sources. Additional photos from the workshop are posted on the IRE_NICAR page on Facebook.