When nerds and words collide 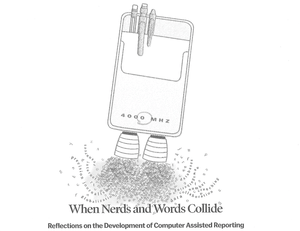 In 1999, Nora Paul organized a gathering at The Poynter Institute of a group of journalists who were on the cutting edge of computer-assisted reporting at the time.

The result was a short book titled "When Nerds and Words Collide," featuring chapters from many leaders in data-driven journalism. It also details the beginning of what is now the National Institute of Computer-Assisted Reporting.

1989 was a watershed moment for CAR, Paul writes, but a decade later progress on some fronts had stalled. The issues raised by these journalists nearly 15 years ago are many of the same ones facing journalists today:

Posted with permission from Nora Paul and The Poynter Institute.