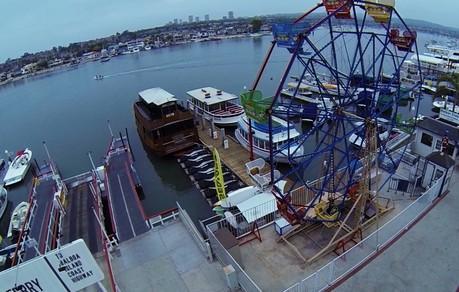 An aerial shot of the Balboa Fun Zone in Newport Beach, California. Photo by Sally French

When I told my parents I was using my graduation money to buy a drone, they thought I was crazy.

"Why don’t you buy some camera gear instead?" they told me.

After all, graduating in May with a photojournalism degree means I’d no longer have access to the fancy Missouri j-school equipment locker I’d been spoiled by for the past few years.

But what my parents didn’t understand is that a drone is the ultimate in camera gear.

Imagine airing video about weather patterns impacting geese migration. The live-shot could actually take the viewer flying among the birds. Or how about reporting on a prairie fire? An overhead shot could reveal the path of the fire.

Matt Waite, founder of the Drone Journalism Lab at the University of Nebraska-Lincoln, explains the current legal status of drones, focusing on three facts about drones: 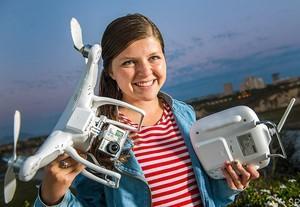 Sally French with her drone. Photo by Stuart Palley 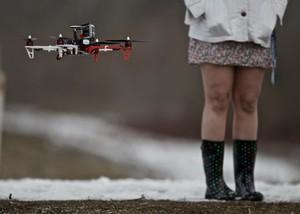 A drone hovers in front of a student in the University of Missouri's drone journalism course in 2013. The students were working on filming geese. Photo by Sally French

I’ve already done both of those myself through the Missouri School of Journalism’s drone journalism program. I was a member of the program in its first year. The laws and regulations are unclear, and none of us were very technical when it came to maintenance, so most of the time we didn’t know what we were doing. But that’s a good thing. The cool thing about pioneering something like a drone research program in a university setting is we could learn about this stunning new technology, yet we didn’t have the pressure of deadlines or financial limitations that a traditional media outlet would have.

And we thought what we were doing was legal, since we weren’t making a profit from it. Turns out, the FAA thought otherwise, as it recently sent a letter requiring the program to cease outdoor flight. I’m sure the FAA has the best intentions – after all, a drone recently fell into a crowd at a bull run, and another drone hit a groom during a wedding photography session. There certainly is a need for regulation.

But drones are here to stay, and people will continue flying -- regulated or not.

Now, the program I graduated from at the Missouri School of Journalism is applying for permits to keep the program going, as are other drone journalism programs across the country.

International news outlets are already jumping on drone use for investigative journalism purposes. Australia’s 60 Minutes used a drone to show fire damage and overcrowding at a detention center where they were denied entrance.

One of my coworkers, a photojournalist at a major daily newspaper in California, told me just the other day how he wished he had a drone to photograph a crime scene in a wilderness area that would have been impossible for him to access on foot.

To the journalism programs applying for FAA permits: Keep it up. Appeal to eager journalism students interested in shaping the next era of journalism. The people in your classes now will be the ones leading newsrooms in the next 20 years, so use this opportunity to teach us the ethics, flight training, and technical skills needed to be a good drone journalist.

Since graduating from the program at Mizzou, I’ve been inspired to start my own blog exploring positive drone use. I’ve joined drone Meetup groups, where I learned about drones you can control from a room miles away and see what the drone sees via goggles. I’ve met filmmakers who build 3D cameras mounted to drones. I go out early in the morning and fly with other drone pilots. All these experiences have taught me how much I don’t know, which make me only more eager for more drone journalism programs at universities.

News outlets haven’t totally embraced drones yet due to murky FAA regulations, but when they do, I want to be ready for it. I envision a world 20 years from now where every newsroom has its own drone journalist. I hope to be one.

Sally French is a 2013 graduate of the Missouri School of Journalism, where she volunteered in the NICAR database library in addition to interning with the investigative reporting team at NBC4 Los Angeles. She currently covers local news at the Orange County Register. For more drone journalism updates, read her blog at www.thedronegirl.com or follow her on Twitter @thedronegirl.