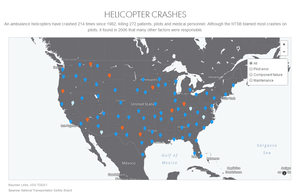 The Ground-based Midcourse Defense system, or GMD, was supposed to protect Americans against a chilling new threat from "rogue states" such as North Korea and Iran. But a decade after it was declared operational, and after $40 billion in spending, the missile shield cannot be relied on, even in carefully scripted tests that are much less challenging than an actual attack would be, a Los Angeles Times investigation has found.

The Missile Defense Agency has conducted 16 tests of the system's ability to intercept a mock enemy warhead. It has failed in eight of them, government records show.

The examination of prison records revealed that Nebraska Department of Correctional Services officials had released or were set to release dozens of prisoners years before their sentences were supposed to end.

All told, state officials had carved at least 750 years off the collective sentences of more than 200 of the state’s worst criminals. The problem: The department was using a formula that doesn’t square with how sentences should be calculated.

After The World-Herald revealed its findings Friday to Corrections Director Michael Kenney, he immediately directed staff to recalculate the sentences. He said he had been unaware of the problem.

Branson residents are questioning why city police arrested a 77-year-old man with health problems on an Arkansas bad check warrant from 1996 and held him in jail for five days.

Shortly after his release from Taney County Jail, Evans E. Ray was found dead in his home. It's unclear how long he was deceased in the home before he was found.

The New York State Education Department’s most recent list of teachers whose credentials do not match their teaching assignments includes 4,280 assignments in more than 1,100 schools across the state, a Central New York Media Group review of state education records found.

Last weekend and into today, the billionaire Koch brothers and supporters converged on the St. Regis Monarch Beach Resort in Dana Point. This columned, luxury compound, little more than an hour north of San Diego, has 400 rooms, a spa, a golf course, a private beach and six restaurants. Staff confirmed the entire hotel — including food and beverage service — had been bought out for a special event.

An event so secret it had a code name on the schedule: “T&R Sales Meeting.”

Hotel guests who weren’t part of the conference — including two inewsource reporters who stayed the night Friday — were escorted out of the hotel by security on Saturday afternoon.

Kids with no vaccinations clustered in some schools | The Columbus Dispatch

Some Ohio schools might as well have a target painted on the side of the building as far as public-health experts are concerned.

In some schools in the state, as many as 1 in 3 incoming kindergartners and newly enrolled older students have parents who oppose vaccines, according to a Dispatch analysis of schools’ immunization counts.

Bottom line is more than meets the eyes | The Virginian-Pilot

In one of the most recent releases, Medicare published data about payments to physicians and for outpatient services.

According to the records, in 2012, he collected upward of $6 million from the government insurance for seniors, the second-highest amount among nearly 20,000 physicians and other individual providers listed in Virginia. Only a Richmond-based radiologist specializing in minimally invasive procedures ranked higher, receiving $8.2 million from Medicare.

More than $3.3 million in legal settlements have been approved behind closed doors in St. Clair County in the past 10 years -- possibly in violation of the state's Sunshine laws.

The settlements range from $900,000 to a teenage boy allegedly sexually abused at the county's Juvenile Detention Center to $1,000 to a person claiming injuries when placed under arrest by sheriff's deputies. The county admits no wrongdoing as part of the settlements. County officials released the settlements to the News-Democrat following a request through the Freedom of Information Act.

Executives and employees of the troubled Veterans Affairs health system enjoyed over $100 million in bonuses, according to the Asbury Park Press.

The federal government warned the VA in the past about the growing issue of excessive patient wait times and its detrimental effect on the health care system. Still, VA executives and employees received $108.7 million in bonuses over the course of three years.

Since 2005 more than a dozen reports have been released showing the negative impact of patient wait times at both the national and local levels. The VA said more than 57,000 veterans waited 90 days before seeing a doctor.

​Lawmakers in the House of Representatives Tuesday unanimously passed a measure that will suspend VA bonuses until 2016. Decorated war veteran Eric Shinseki resigned as Secretary of Veterans Affairs after the outbreak of this information, and the agency put a hold on employee bonuses for 2014.

This Two Elk series, supported by grants from the Fund for Investigative Journalism and WyoFile founder Christopher Findlater, is an extensive case study of one such troubled project; its audacious Colorado-based promoter, and the state and federal officials who kept the project alive despite numerous warning signs that it was a scheme beyond saving. It is also a human story of dreams — outsized American dreams — and of one man’s ingenious but fruitless 20-year quest to build an energy empire in the heart of Wyoming coal country. In this regard it is an example of WyoFile’s continuing commitment to report fearlessly on the people, places and policies of our mountain state. Stories in “The Two Elk Saga” have appeared on Tuesdays and Thursdays, and the series concludes on Tuesday, June 10

Every year, the federal government makes thousands of requests for court-ordered electronic surveillance, often without a warrant. And long after the investigations that spawned them have ended, the vast majority of these legal proceedings are sealed indefinitely from public view—unlike nearly all other aspects of American judicial proceedings.

The Wall Street Journal surveyed 25 of the top federal district courts in the U.S. and found that most couldn’t provide even basic data on the electronic-surveillance orders, which allow investigators to trace telephone calls, locate wireless phones and monitor Internet accounts. What data were available indicates a significant increase in location tracking and other high-tech surveillance methods—and a system in which more than 90% of the documents showing the government’s legal reasoning are sealed from the public.

On the heels of its investigation, the Journal filed legal motions in federal court in Texas to unseal some of these applications and orders, arguing that the First Amendment grants the public the right to access court records, including hearing transcripts, docket sheets, and search-warrant applications, and that electronic surveillance orders should be no different.

To read the story, click here. To learn how the Journal evaluated sealed surveillance orders, visit the Law Blog.

In the weeks leading up to a botched execution, an Oklahoma assistant attorney general referred to defense attorneys’ warnings that the execution could go awry as “hysterical speculation,” records released to the Tulsa World show.

Assistant Attorney General John Hadden also wrote in a March 21 email that he was “not eager to answer a bunch of questions” from reporters about the state’s execution plans but worried about appearing “overly secretive.”

Attorney General Scott Pruitt’s office released more than 100 pages of emails to the World Friday following an Open Records Act request. The World requested all emails since March 1 regarding the execution of Lockett and Warner and development of the state’s execution protocol.

The World’s records requests to Fallin’s office, DOC and the DPS all remain pending.

San Diego County Supervisor Bill Horn said he bought a charity decades ago for $25, called it the Basic Faith Foundation and used it to hold money from real estate deals.

Horn said he gave the interest to Christian missionaries in Mexico and South America.

inewsource dug into the Basic Faith Foundation and into Horn’s own description of how he used it. Five experts with national reputations in tax law and nonprofit management reviewed the transcript of inewsource’s interview with the supervisor, as well as the supporting documentation from state and federal agencies.

States have been reducing hospital beds for decades, because of insurance pressures as well as a desire to provide more care outside institutions, USA TODAY reports.

Tight budgets during the recession forced some of the most devastating cuts in recent memory, says Robert Glover, executive director of the National Association of State Mental Health Program Directors. States cut $5 billion in mental health services from 2009 to 2012. In the same period, the country eliminated at least 4,500 public psychiatric hospital beds — nearly 10% of the total supply, he says.

The result is that, all too often, people with mental illness get no care at all.

In a series of stories in the coming months, USA TODAY will explore the human and financial costs that the country pays for not caring more about the 10 million Americans with serious mental illness.

Read the full story from The Denver Post here.